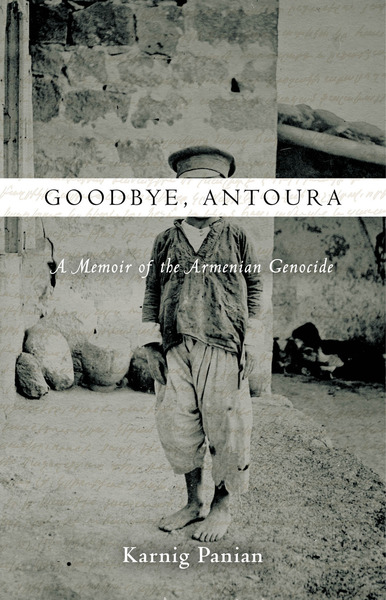 When World War I began, Karnig Panian was only five years old, living among his fellow Armenians in the Anatolian village of Gurin. Four years later, American aid workers found him at an orphanage in Antoura, Lebanon. He was among nearly 1,000 Armenian and 400 Kurdish children who had been abandoned by the Turkish administrators, left to survive at the orphanage without adult care.

This memoir offers the extraordinary story of what he endured in those years—as his people were deported from their Armenian community, as his family died in a refugee camp in the deserts of Syria, as he survived hunger and mistreatment in the orphanage. The Antoura orphanage was another project of the Armenian genocide: its administrators, some benign and some cruel, sought to transform the children into Turks by changing their Armenian names, forcing them to speak Turkish, and erasing their history.

Panian's memoir is a full-throated story of loss, resistance, and survival, but told without bitterness or sentimentality. His story shows us how even young children recognize injustice and can organize against it, how they can form a sense of identity that they will fight to maintain. He paints a painfully rich and detailed picture of the lives and agency of Armenian orphans during the darkest days of World War I. Ultimately, Karnig Panian survived the Armenian genocide and the deprivations that followed. Goodbye, Antoura assures us of how humanity, once denied, can be again reclaimed.

Karnig Panian was a longtime educator and vice principal at Djemaran, the Armenian Lyceum, based in Beirut, Lebanon.

"Goodbye, Antoura stands out as a telling, concise, and human portrait of a painful and traumatic component of the Armenian genocide. Beyond academic circles, the memoir could find a special audience among young adults, much as The Diary of Anne Frank has done. Panian's skill at weaving the celestial with the hellish is a true gift to the reader; through Panian's work, one can experience intimately this knot of angst and awe that is often concomitant with being a thoughtful child."

—Nora Lessersohn,Journal of the Ottoman and Turkish Studies Association

"Though surely dark at times, Panian's journey to salvation and his eventual transition into a leading intellectual and education leader in the Armenian Diaspora is an adventure steeped in hope, courage, and optimism. His description of the horrors he was forced to live, coupled with the hopefulness that his new life promised after Antoura, makes the English translation of Goodbye, Antoura an invaluable addition to the already rich library of genocide memoirs that give the survivors a voice."

"This searing account of a little boy wrenched from family and innocence manages to retrieve irrepressible flashes of great humanity amid the horror and chaos. It is a literary gem."

"A remarkable and unforgettable book. It is an indispensable tool for awakening our consciences and restoring our collective sense of decency and our solidarity with all those who have suffered the horrors of genocide."

"A poignant story of a child's stubborn determination to survive, Goodbye, Antoura is an important book about memory, history, and the Armenian Genocide."

—Davide Rodogno, author of Against Massacre

"Goodbye, Antoura is far more than a personal memoir. Karnig Panian has captured with literary creativity the spirit of person, family, community, nation and humanity—the essence of identity itself. Within this saga of an Armenian orphaned boy being forcibly stripped of his identity is a story of universal relevance."

—Richard G. Hovannisian, author of The Republic of Armenia

The Financial Times
A Key To Our Memories

Stanford University Press blog
A Memoir of the Armenian Genocide