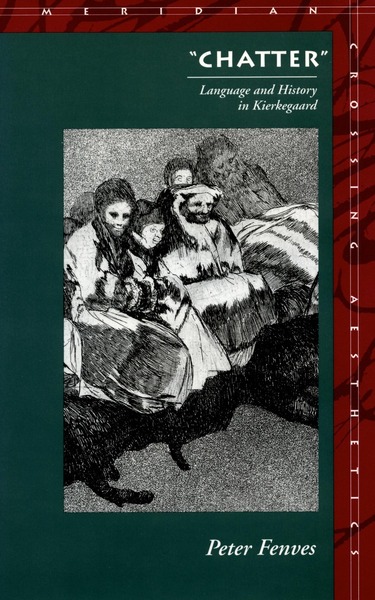 "Chatter" cannot always be taken lightly, for the insignificance and insubstantiality of "idle talk," "prattle," "nonsense," and so forth challenge the very notions of substance and significance through which rational discourses seek justification. This book shows that in "chatter" Kierkegaard uncovered a specfically linguistic mode of negativity—not that of the Hegelian concept—became the medium in which a non-speculative and non-historicist presentation of history could be carried out.

The author examines in detail those writings of Kierkegaard in which he undertook complex negotiations with the threat—and also the promise—of "chatter." One effect of these negotiations is revealed as an insistence on "existence," which alone could appear as a counterweight to the lightness and insubstantiality of mere language. The author's readings of both well-known and neglected works do not simply show how indirect communication affects this insistence on "existence"; they also show how the negation of direct communication (which in genderal makes reading necessary) undoes the distinctions through which weighty "existence" and insubstantial "chatter" are set apart.

"Fenves has written the first book in English that squarely confronts the central enigma of Kierkegaard's authorship. Nearly unprecedented in its ability to illuminate the philosophical and literary underpinnings of Kierkegaard's text, the book is at once learned, lively, probing, and persuasive. There is certainly nothing idle in the way 'Chatter' situates as well as takes the measure of the seminal importance of Kierkegaard for many of today's unresolved debates about the relation of language and philosophy of history."