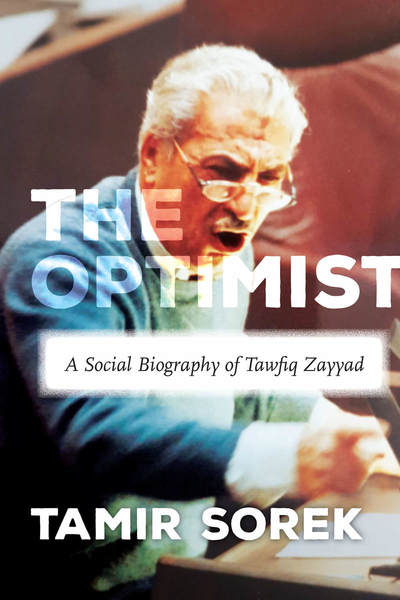 Tawfiq Zayyad (1929–94) was a renowned Palestinian poet and a committed communist activist. For four decades, he was a dominant figure in political life in Israel, as a local council member, mayor of Nazareth, and member of the Israeli parliament. Zayyad personified the collective struggle of the Palestinian citizens of Israel, challenging the military government following the creation of the state of Israel, leading the 1976 nationwide strike against land confiscation, and tirelessly protesting Israeli military occupation after 1967. With this book, Tamir Sorek offers the first biography of this charismatic figure.

Zayyad's life was one of balance and contradiction—between his revolutionary writings as Palestinian patriotic poet and his pragmatic political work in the Israeli public sphere. He was uncompromising in his protest of injustices against the Palestinian people, but always committed to a universalist vision of Arab-Jewish brotherhood. It was this combination of traits that made Zayyad an exceptional leader—and makes his biography larger than the man himself to offer a compelling story about Palestinians and the state of Israel.

Tamir Sorek is Liberal Arts Professor of Middle East History at Pennsylvania State University. He is the author of Palestinian Commemoration in Israel: Calendar, Monuments, and Martyrs (Stanford, 2015) and Arab Soccer in a Jewish State: The Integrative Enclave (2007).

"With nuance, precision, and admiration, Tamir Sorek tells the story of Tawfiq Zayyad's complicated and heroic life, and with it, the story of an ongoing catastrophe and the Palestinian people's unceasing battle for survival and dignity. The Optimist pays homage to resistance, radical politics, and the struggle for social mobility, all of which typified Zayyad's long career. A bold and important achievement."

"Tamir Sorek provides a richly detailed excursion into the life and work of an eminent 'organic intellectual,' who found in language a means for recovery after Israel's colonial erasure of Palestine. The Optimist is valuable to anyone interested in encountering fusions between Marxism and Messianism, Jewishness and Arabness, Christianity and Islam, childhood and adulthood, the prosaic and the poetic, the political and the personal."

"The Optimist is a deftly written biography that will fascinate readers already familiar with the broad contours of Tawfiq Zayyad's life as well as those encountering him for the first time. Tamir Sorek provides fresh insight into how someone can maintain hope in a region too often characterized as hopeless."

"[Tamir Sorek] presents an unprecedented, in-depth exploration of the life and work of Tawfiq Zayyad....The Optimist is a must read."

"This sympathetic and informative biography is a welcome celebration of [Tawfiq Zayyad's] memory as well as a valuable contribution to our understanding of Palestinian history."

"Tamir Sorek has written a superb biography of Tawfiq Zayyad... The imperative for Zayyad, as Sorek shows, was (and, presumably, would be) to organize and mobilize against conditions and policies of oppression by taking advantage of every non-violent opportunity for struggle."

"The Optimist is more than an excellent biography of Zayyad. It offers a comprehensive account of the ICP, from its early formations to its conceptions, contested ideology, and hierarchal structure. The book is also highly recommended for its insightful political history of Palestinian citizens of Israel under the enduring communist leadership throughout the second half of the twentieth century."

A Revolutionary Palestinian Poet Who Saw Jews as Brothers