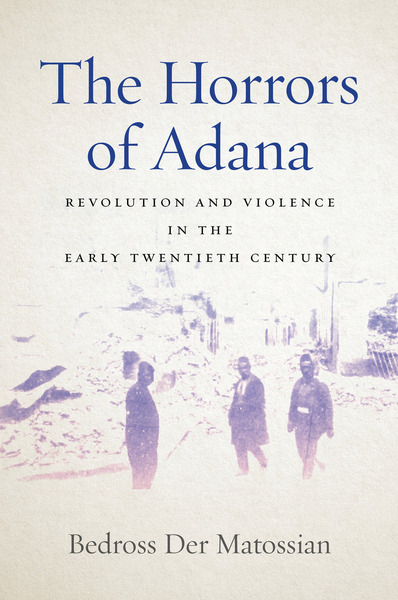 In April 1909, two waves of massacres shook the province of Adana, located in the southern Anatolia region of modern-day Turkey, killing more than 20,000 Armenians and 2,000 Muslims. The central Ottoman government failed to prosecute the main culprits, a miscarriage of justice that would have repercussions for years to come. Despite the significance of these events and the extent of violence and destruction, the Adana Massacres are often left out of historical narratives. The Horrors of Adana offers one of the first close examinations of these events, analyzing sociopolitical and economic transformations that culminated in a cataclysm of violence.

Bedross Der Matossian provides voice and agency to all involved in the massacres—perpetrators, victims, and bystanders. Drawing on primary sources in a dozen languages, he develops an interdisciplinary approach to understand the rumors and emotions, public spheres and humanitarian interventions that together informed this complex event. Ultimately, through consideration of the Adana Massacres in micro-historical detail, this book offers an important macrocosmic understanding of ethnic violence, illuminating how and why ordinary people can become perpetrators.

Bedross Der Matossian is Associate Professor of History at the University of Nebraska, Lincoln. He is the author of Shattered Dreams of Revolution: From Liberty to Violence in the Late Ottoman Empire (Stanford, 2014).

"The Horrors of Adana is a truly groundbreaking and highly nuanced exploration of intercommunal, sectarian, and nationalist violence in the late Ottoman Empire. A must-read for scholars of the modern Middle East."

—Ussama Makdisi, Rice University, author of Age of Coexistence: The Ecumenical Frame and the Making of the Modern Arab World

"The Horrors of Adana is an outstanding analysis of a massacre never before deeply studied. Bedross Der Matossian offers a thorough inquiry into the perpetrators, victims, bystanders, and social-political context, useful to all those interested in understanding processes of mass violence."

"With The Horrors of Adana, the Adana Massacres get their own story, a story that needs telling. Bedross Der Matossian's deeply researched and engagingly argued book situates Adana in a longer trajectory of 'forgotten' massacres and as part of Ottoman history more broadly."

—Michelle Tusan, University of Nevada, Las Vegas, author of The British Empire and the Armenian Genocide: Humanitarianism and Imperial Politics from Gladstone to Churchill

"Der Matossian draws on an impressive array of sources in Armenian, Arabic, French, German, Greek, Hebrew, Ladino, Russian, and both Ottoman and modern Turkish to paint an all-encompassing picture of the events from the perspectives of perpetrators, victims, and bystanders."

"Der Matossian himself is rather modest about his aims and achievements, but I do not have to be, so here goes: The Horrors of Adana is the first broad, deep, and analytical take on the Adana massacres. The introduction alone is a tour de force... The author's detailed micro level analysis of the actions and reactions of perpetrators, bystander, and victims – who fight back, outnumbered and outgunned – is dispassionate, evenhanded, and yet reads like a thriller."

"By analyzing the structure of violence from various perspectives, Professor Der Matossian was able to bring attention to the spiral of violence that occurred in Adana while explaining the multi-faceted, complex phenomenon of massacre and violence."

Nebraska Today
“Where Is Humanity?”: A Conversation with Bedross Der Matossian