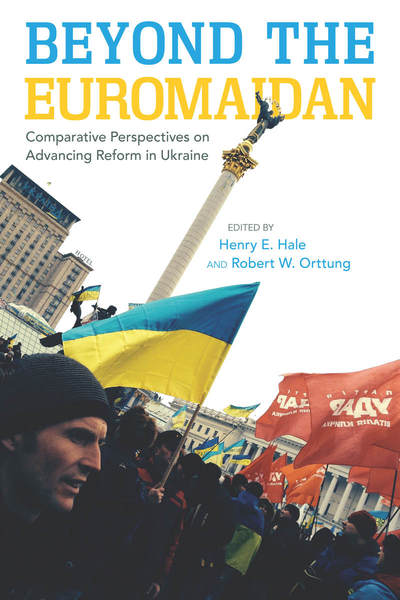 Beyond the Euromaidan
Comparative Perspectives on Advancing Reform in Ukraine
Edited by Henry E. Hale and Robert W. Orttung

Beyond the Euromaidan examines the prospects for advancing reform in Ukraine in the wake of the February 2014 Euromaidan revolution and Russian invasion. It examines six crucial areas where reform is needed: deep internal identity divisions, corruption, the constitution, the judiciary, plutocratic "oligarchs," and the economy. On each of these topics, the book provides one chapter that focuses on Ukraine's own experience and one chapter that examines the issue in the broader context of international practice.

Placing Ukraine in comparative perspective shows that many of the country's problems are not unique and that other countries have been able to address many of the issues currently confronting Ukraine. As with the constitution, there are no easy answers, but careful analysis shows that some solutions are better than others. Ultimately, the authors propose a series of reforms that can help Ukraine make the best of a bad situation. The book stresses the need to focus on reforms that might not have immediate effect, but that comparative experience shows can solve fundamental contextual challenges. Finally, the book shows that pressures from outside Ukraine can have a strong positive influence on reform efforts inside the country.

Henry E. Hale is Professor of Political Science and International Affairs at The George Washington University.

"This excellent volume identifies the principal obstacles that have restrained reform in Ukraine over the past twenty-five years. It offers smart recommendations for overcoming those barriers and, using a comparative approach, suggests models from other countries that could help put Ukraine on the path endorsed by the Maidan Revolution—to become a normal European state."

"Beyond the Euromaidan is a fantastic collection of essays from some of the world's best experts on Ukraine on one of the most pressing issues of our time: prospects for reform in Ukraine. You cannot understand, evaluate, or support Ukraine's current political and economic reform agenda without first reading this book."