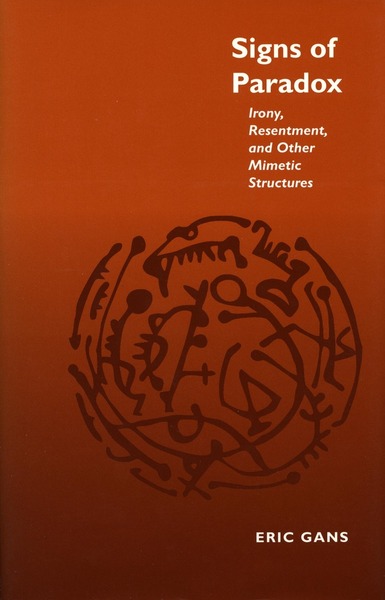 Starting from the minimal principle of generative anthropology—that human culture originates as "the deferral of violence through representation"—the author proposes a new understanding of the fundamental concepts of metaphysics and an explanation of the historical problematic that underlies the postmodern "end of culture."

Part I begins with the paradoxical emergence of the "vertical" sign from the "horizontal" world of appetite. Two persons reaching for the same object are a minimal model of this emergence; their "pragmatic paradox" can be resolved only by substituting the representation of the object for its appropriation. The nature of paradox and the related notion of irony, as well as the fundamental concepts of being, thinking, and signification, are rethought on the basis of this triangular model, leading to an anthropological interpretation of the origin of philosophy and semiotics in Plato's Ideas. Part I concludes with an exploration of the psychoanalytic categories of the unconscious and the erotic.

Part II develops the idea that material exchange originates in the sparagmos or violent rendering of the sacrificial victim from which each participant obtains a roughly equal portion. The dependence of the process on the central victimary figure culminates in the Holocaust, the extermination of the Jews, whose crucial role in Western culture is their rejection of the central image in favor of peripheral exchange. As a result, postmodern dialogue becomes dominated by the rhetoric of victimage, and the culture of centrality gives way to an aesthetic of the marginal.

Eric Gans is Professor of French at the University of California, Los Angeles. His previous books on generative anthropology are The Origin of Language (1981), The End of Culture (1985), Science and Faith (1990), and Originary Thinking (Stanford, 1993).

“Gans once again achieves in this book a level of explanatory coherence and a richness of ideas rarely seen today. In this extremely interesting and complex work, an event in itself, he proves himself a thinker of the first magnitude.”—Tobin Siebers, University of Michigan