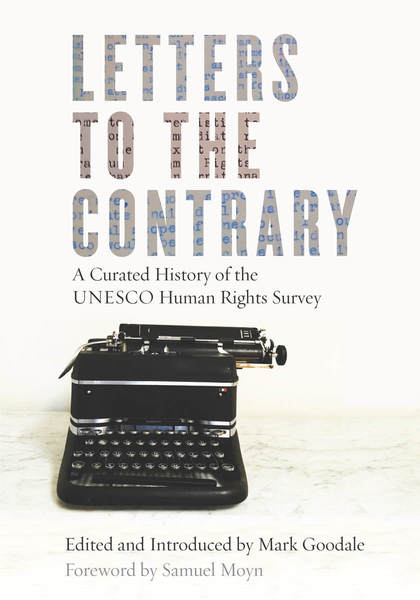 Letters to the Contrary
A Curated History of the UNESCO Human Rights Survey
Edited and Introduced by Mark Goodale, Foreword by Samuel Moyn
SERIES: Stanford Studies in Human Rights

Since its adoption in 1948, historians and human rights scholars have claimed that the Universal Declaration of Human Rights was influenced by UNESCO's 1947–48 global survey of intellectuals, theologians, and cultural and political leaders, that supposedly demonstrated a truly universal consensus on human rights. Based on meticulous archival research, Letters to the Contrary provides a curated history of the UNESCO human rights survey and demonstrates its relevance to contemporary debates over the origins, legitimacy, and universality of human rights. In collecting, annotating, and analyzing these responses, including letters and responses that were omitted and polite refusals to respond, Mark Goodale shows that the UNESCO human rights survey was much less than supposed, but also much more. In many ways, the intellectual struggles, moral questions, and ideological doubts among the different participants who both organized and responded to the survey reveal a strikingly critical and contemporary orientation, raising similar questions at the center of current debates surrounding human rights scholarship and practice.

Mark Goodale is Professor of Cultural and Social Anthropology at the University of Lausanne and Series Editor of Stanford Studies in Human Rights. The author or editor of 12 other volumes, his most recent book is Anthropology and Law: A Critical Introduction (2017).

"In this clever and timely book, Mark Goodale complicates the presumed universality of human rights, providing an alternative history of the UNESCO process. Besides representing a fabulous archival 'find,' Letters to the Contrary provides vital historical and anthropological analysis to illuminate these texts. This stellar book is novel in its focus on a largely overlooked episode in the history of UNESCO and rights and classic in the sense that rights and internationalism continue to be central to so many disciplines today. Unearthed letters from the likes of Eliot, Auden, Schoenberg, Carr, and Huxley form a veritable who's who of twentieth-century political thought. Lively, eminently readable, and utterly stimulating."

"Goodale's superb reconstruction of the history surrounding the UNESCO-sponsored survey of human rights demonstrates perfectly the political and contingent nature of the origins of the international human rights enterprise. It reveals both the centrality of philosophy to that enterprise, and the virtual impossibility of seeking a conception of human rights that is universal in philosophical analysis rather than political compromise."

"Human rights might survive our age of rupture if we cease to delude ourselves with myth-making about their historical origins. In this outstanding book, Mark Goodale shows unequivocally that the creation moment of 'the age of rights' was in no sense universal at all. Letters to the Contrary makes it impossible to defend the triumphalist vision of the postwar human rights story with the blithe assertion that everybody agreed human rights were now the only game in town."