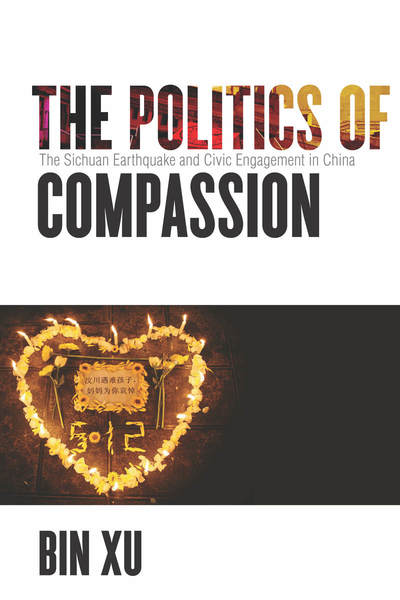 Co-winner of the 2018 Mary Douglas Prize for Best Book, sponsored by the American Sociological Association (ASA) - Sociology of Culture Section.

Honorable Mention in the 2018 Prize on Asia/Transnational, sponsored by the American Sociological Association (ASA) - Asia and Asian America Section.

The 2008 Sichuan earthquake killed 87,000 people and left 5 million homeless. In response to the devastation, an unprecedented wave of volunteers and civic associations streamed into Sichuan to offer help. The Politics of Compassion examines how civically engaged citizens acted on the ground, how they understood the meaning of their actions, and how the political climate shaped their actions and understandings.

Using extensive data from interviews, observations, and textual materials, Bin Xu shows that the large-scale civic engagement was not just a natural outpouring of compassion, but also a complex social process, both enabled and constrained by the authoritarian political context. While volunteers expressed their sympathy toward the affected people's suffering, many avoided explicitly talking about the causes of the suffering—particularly in the case of the collapse of thousands of schools. Xu shows that this silence and apathy is explained by a general inability to discuss politically sensitive issues while living in a repressive state. This book is a powerful account of how the widespread death and suffering caused by the earthquake illuminates the moral-political dilemma faced by Chinese citizens and provides a window into the world of civic engagement in contemporary China.

Bin Xu is Assistant Professor of Sociology at Emory University.

"Bin Xu's analytic insights into "the politics of compassion" are acute, but his account never erases the personal and human. The result is riveting, provocative, and ultimately heart breaking."

"A riveting account of the aftermath of the Sichuan earthquake. All of the different types of actors, both within the state and in society, that constitute "civil society" in China are here brought to life and depicted in their complex interactions and negotiations. The Politics of Compassion should be required reading for all students of contemporary Chinese society and politics, as well as on state-society relations in general."

—David A. Palmer, The University of Hong Kong

"In a field heavily influenced by institutional and organizational analysis, Bin Xu's book foregrounds action, meaning, and context in the formation of Chinese civil society. Analyzing the practices of civic engagement following the Sichuan earthquake in 2008, Xu tells a rich and moving story of both apathy and moral sentiments, powerlessness and agency. The result is a refreshing, cultural-sociological perspective on the politics of compassion and civil society in China."

"The Politics of Compassion does a masterful job telling the story of the Sichuan disaster and its aftermath in ways that draw readers into the specific details of a particular time and place while allowing us to see the broader political pattern as one that is repeated time and again in every corner of the planet.[It] is a must-read for anyone interested in Chinese civil society. Scholars of social policy, nonprofit management, disaster recovery, and state–society relations more generally will also find it to be an engaging, uplifting, disturbing, and highly provocative book to add to their shelves and their intellectual libraries."

"Xu presents a powerful new concept to account for the extraordinary activism after the Sichuan earthquate, offering an in-depth analysis of activists' circumstances, actions, motivations, and justifications. This is an important book for all China scholars working on social movements and civil society, and may also offer new insights to anyone interested in disaster-related social and political changes." Huan Guo, Journal of Chinese Political Science

"This book provides an original, much-needed, bottom-up perspective on the political and sociocultural aspects of the aftermath of the enormous tragedy of the 2008 Sichuan earthquake in China. Drawing upon extensive in-depth fieldwork conducted in Sichuan and elsewhere, the author goes beyond the conventional narrative of a compassionate post-disaster "civil society" to reveal the complex ways in which the underlying political and social contexts shape the action and meanings of various self-organized, grassroots civic engagements under authoritarianism....[T]his book is an illuminating yet sobering read for scholars interested in issues of civil society and social movement in China."

"Xu's Politics of Compassion makes an important contribution to our understanding of civic engagement and civil society in contemporary China. It is an exemplary ethnography of citizens' involvement and participation within a larger political context."

"The Politics of Compassionis an important contribution to a deeper theoretical and empirical understanding of civil society in an authoritarian state....[Xu's] attention to the cultural aspect of civic engagement provides great insight regarding how compassion is a sociopolitical act shaped by both structural relations between the civil society and the state, and by the meanings and goals people give to their actions. Therefore, the book is a valuable read for scholars seeking to understand civil society and volunteerism in China, as well as those working on social movements and disaster response."