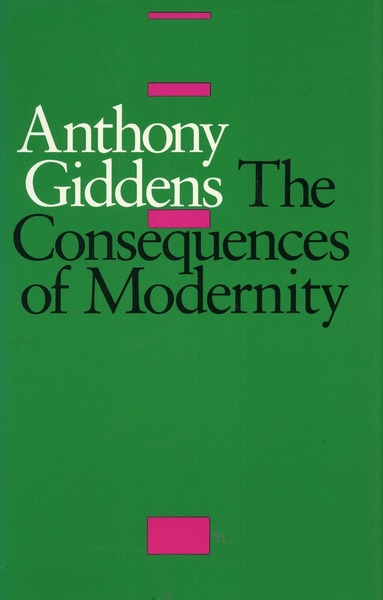 The Consequences of Modernity
Anthony Giddens

In this major theoretical statement, the author offers a new and provocative interpretation of institutional transformations associated with modernity. What is modernity? The author suggests, "As a first approximation, let us simply say the following: 'modernity' refers to modes of social life or organization which emerged in Europe from about the seventeenth century onwards and which subsequently became more or less worldwide in their influence."

We do not as yet, the author argues, live in a post-modern world. The distinctive characteristics of our major social institutions in the closing years of the twentieth century suggest that, rather than entering into a period of post-modernity, we are moving into a period of "high modernity" in which the consequences of modernity are becoming more radicalized and universalized than before. A post-modern social universe may eventually come into being, but this as yet lies on the other side of the forms of social and cultural organization that currently dominate world history.

In developing a fresh characterization of the nature of modernity, the author concentrates on the themes of security versus danger and of trust versus risk. Modernity is a double-edged phenomenon. The development of modern social institutions has created vastly greater opportunities for human beings to enjoy a secure and rewarding existence than in any type of pre-modern system. But modernity also has a somber side that has become very important in the present century, such as the frequently degrading nature of modern industrial work, the growth of totalitarianism, the threat of environmental destruction, and the alarming development of military power and weaponry.

The book builds upon the author's previous theoretical writings and will be of great interest to those who have followed his work through the years. However, this book covers issues the author has not previously analyzed and extends the scope of his work into areas of pressing practical concern.

"A highly general and speculative analysis of modernity that is challenging and thought-provoking. . . . This is the kind of book that confronts a discipline, in this case sociology, with a number of issues that can provide a formidable agenda for those who pursue them. . . . It is geared to a wide audience that seeks new insights into the questions modernity has generated."

"Few contemporary social scientists bring more determination and talent to the daunting task of creating a new tradition than Anthony Giddens. Elements of virtually every classic and contemporary social scientific school and an impressive array of philosophical traditions, each critically assessed and modified, find a home in Giddens's paradigm. . . . Giddens's new beginning represents a significant step toward the regeneration of our discipline."

"Provides a new and quite engaging perspective on the nature of modernity and its peculiar relationships to traditional social forms. Giddens is outstanding in the way that he is able to absorb the whole tradition of social thought since the time of the classical sociologists and to play various theorists off against one another as a means of defining his own argument. He builds not only upon the whole tradition, but upon his own earlier work."