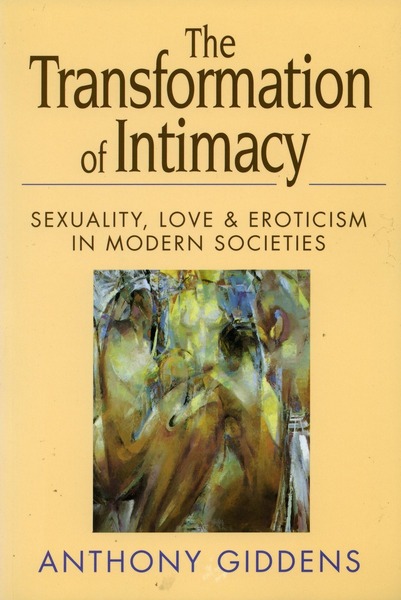 The Transformation of Intimacy
Sexuality, Love, and Eroticism in Modern Societies
Anthony Giddens

The sexual revolution: an evocative term, but what meaning can be given to it today? How does “sexuality” come into being, and what connections does it have with the changes that have affected personal life more generally? In answering these questions, the author disputes many of the dominant interpretations of the role of sexuality in modern culture.

The author suggests that the revolutionary changes in which sexuality has become cauth up are more long-term than generally conceded. He sees them as intrinsic to the development of modern societies as a whole and to the broad characteristics of that development. Sexuality as we know it today is a creation of modernity, a terrain upon which the contradictory tendencies of modern social life play themselves out in full. Emancipation and oppression, opportunity and risk—these have become a part of a heady mix that irresistably ties our individual lives to global outcomes and the transformation of intimacy.

We live today in a social order in which, for the first time in histroy, women are becoming equal to men—or at least have lodged a claim to such equality as their right. The author does not attempt to analyze the gender inequalities that persist in the economic or political domains, but instead concentrates on a more hisdden personal area in which women—ordinary women, in the course of their day-to-day lives, quite apart from any political agenda—have pioneered changes of greate, and generalizable, importance. These changes essentially concern an exploration of the potentialities of the “pure relationship,” a relaitonship that presumes sexual and emotional equality, and is explosive in its connotations for pre-existing relations of power.

The author analyzes the emergence of what he calls plastic sexuality—sexuality freed from its intrinsic relation to reproduction—in terms of the emotional emancipation implicit in the pure relationship, as well as women’s claim to sexual pleasure. Plastic sexuality is decentered sexuality, freed from both reproduction and subservience to a fixed object. It can be molded as a trait of personality, and thus become bound up with the reflexivity of the self. Premised on plastic sexuality, the pure relationship is not exclusively heterosexual; it is neutral in terms of sexual orientation.

The author speculates that the transformaion of intimacy might be a subversive influence on modern institutions as a whole, for a social world in which the dominant ideal was to achieve intinsic rewards from the company of others might be vastly different from that which we know at the present.

"Giddens, a towering figure in Anglo-American sociology, has now extended his analyses of modernity to include the area of intimacy in this thoughtful and provocative book."

"This is a short book that differs in style from Giddens's others. He strives here for accessibility and readability. . . . The chapters are all interesting and informative, thoughtful and thought-provoking, concise and to the point."