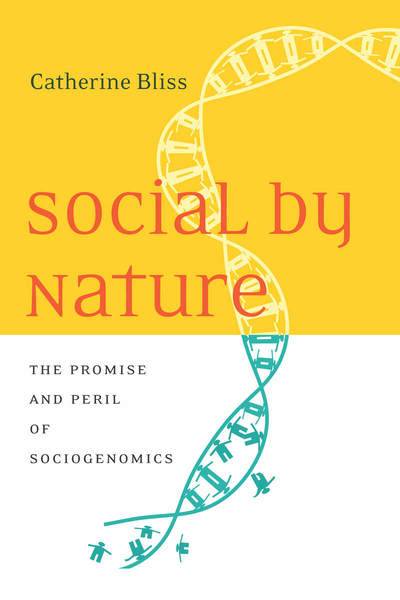 Social by Nature
The Promise and Peril of Sociogenomics
Catherine Bliss

Sociogenomics has rapidly become one of the trendiest sciences of the new millennium. Practitioners view human nature and life outcomes as the result of genetic and social factors. In Social by Nature, Catherine Bliss recognizes the promise of this interdisciplinary young science, but also questions its implications for the future. As she points out, the claim that genetic similarities cause groups of people to behave in similar ways is not new—and a dark history of eugenics warns us of its dangers.

Over the last decade, sociogenomics has enjoyed a largely uncritical rise to prominence and acceptance in popular culture. Researchers have published studies showing that things like educational attainment, gang membership, and life satisfaction are encoded in our DNA long before we say our first word. Strangely, unlike the racial debates over IQ scores in the '70s and '90s, sociogenomics has not received any major backlash. By exposing the shocking parallels between sociogenomics and older, long-discredited, sciences, Bliss persuasively argues for a more thoughtful public reception of any study that reduces human nature to a mere sequence of genes.

This book is a powerful call for researchers to approach their work in more socially responsible ways, and a must-read for anyone who wants to better understand the scholarship that impacts how we see ourselves and our society.

Catherine Bliss is Associate Professor of Sociology at the University of California, San Francisco. She is the author of Race Decoded: The Genomic Fight for Social Justice (Stanford, 2012), which won the Oliver Cromwell Cox Book Award from the American Sociological Association.

"An impressive, timely, and critically important book and the first scholarly work to take stock of what the genomics turn means for the social sciences. With uncommon interpretive clarity and dazzling interdisciplinary range, Bliss takes us behind the scenes of the emergent field of sociogenomics. Social by Nature forcefully reveals how genetic social science may share a genealogy with earlier eugenics research—even if unwittingly—and urgently points us to the dangers that may arise from this twenty-first century attempt to link deeply-complex social concerns to narrow genetic causes."

"Catherine Bliss's Social by Nature is critical to understanding the social dangers of over-interpreting genomic data."

"Social by Nature is an insightful, in-depth investigation of the scientific, ethical and political stakes in the emerging field of social genomics. As social scientists and policymakers are urged to jump on the sociogenomics band wagon, Catherine Bliss sounds an urgently needed note of caution and call for more meaningful public engagement."

"[Social by Nature] is a brilliant book—dense at times, but insightful and filled with illustrative anecdotes and case studies. It's one you should read if you care about what drives academic research, scientific racism or genetic futurism."