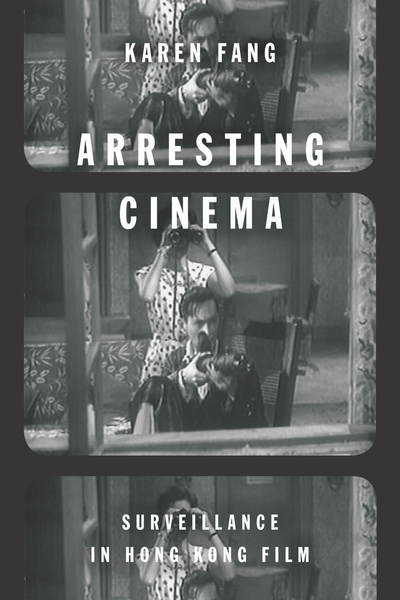 When Ridley Scott envisioned Blade Runner's set as "Hong Kong on a bad day," he nodded to the city's overcrowding as well as its widespread use of surveillance. But while Scott brought Hong Kong and surveillance into the global film repertoire, the city's own cinema has remained outside of the global surveillance discussion.

In Arresting Cinema, Karen Fang delivers a unifying account of Hong Kong cinema that draws upon its renowned crime films and other unique genres to demonstrate Hong Kong's view of surveillance. She argues that Hong Kong's films display a tolerance of—and even opportunism towards—the soft cage of constant observation, unlike the fearful view prevalent in the West. However, many surveillance cinema studies focus solely on European and Hollywood films, discounting other artistic traditions and industrial circumstances. Hong Kong's films show a more crowded, increasingly economically stratified, and postnational world that nevertheless offers an aura of hopeful futurity. Only by exploring Hong Kong surveillance film can we begin to shape a truly global understanding of Hitchcock's "rear window ethics."

Karen Fang is Associate Professor of English at the University of Houston and a member of the Film Committee for the Museum of Fine Arts in Houston.

"Hong Kong films love to look: through windows, across courtyards, over ledges, down gun barrels, into mirrors, and around corners. I always knew that, but never gave it much thought until I read Karen Fang's innovative, refreshing, and yes, Arresting Cinema. Fang's analysis offers an essential complement to Western scholarship on cinema and surveillance."

"An incisive, insightful consideration of a regional cinema that inspires thinking on a much larger scale. Karen Fang's study of surveillance culture in Hong Kong films offers not only a refreshing perspective on world cinema but also, in tracking how Hong Kong is coming to terms with dramatic changes, a challenge to view the globalized world through a new lens."

"Karen Fang's Arresting Cinema breaks new ground in the contemporary surveillance era and makes available to a wider audience a film genre that is relevant well beyond its area focus. As a result, it will be an edifying resource both for area specialists and practitioners and students in diverse disciplines. Conceptually sophisticated yet accessibly written, the book is both timely and of enduring value."

"Professor Karen Fang tackles the history of this aspect of the metropolis in her new book, Arresting Cinema: Surveillance in Hong Kong Film. She shows that Hong Kong has for decades been a metropolis where the movements of people have been tracked by watchful eyes, and she zooms in on how the movie industry has documented the progression of surveillance techniques from the days of black and white film to the present...in short, [this book] has much to offer both to those, like me, always fascinated by the city that is its focus and those who may not realize before reading it just how significant the place has been and remains."

"[T]he author has deftly reconceptualized the cinema through various lens of surveillance. Based on an array of interdisciplinary references from film criticisms to local history as seen in the bibliography, her methodology is both diegetic and extradiegetic, analyzing not only contents of narrative and image but also context of production and reception as well"