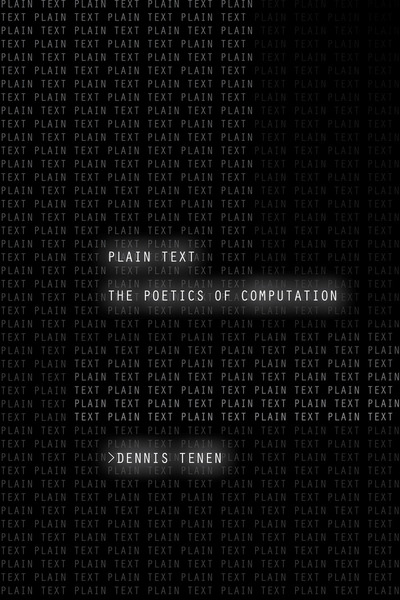 This book challenges the ways we read, write, store, and retrieve information in the digital age. Computers—from electronic books to smart phones—play an active role in our social lives. Our technological choices thus entail theoretical and political commitments. Dennis Tenen takes up today's strange enmeshing of humans, texts, and machines to argue that our most ingrained intuitions about texts are profoundly alienated from the physical contexts of their intellectual production. Drawing on a range of primary sources from both literary theory and software engineering, he makes a case for a more transparent practice of human–computer interaction. Plain Text is thus a rallying call, a frame of mind as much as a file format. It reminds us, ultimately, that our devices also encode specific modes of governance and control that must remain available to interpretation.

Dennis Tenen is Assistant Professor of English and Comparative Literature at Columbia University, where he is a Co-Founder of Columbia's Group for Experimental Research Methods in the Humanities.

"Plain Text stands out as a media study that attends to the historical roots of debates about form and format in language. Tenen's valuable connections between long-standing critical engagements with poetic composition and current digital writing practices emerge from precise and informed attention to his sources."

"Plain Text shows us that text is anything but plain—this is a sharp and imaginative contribution to the debates around what it means to produce, read, and process texts in the era of digital culture."

"An essential read for those interested in text in its many contemporary cultural contexts and points of impact—Tenen moves from strength to strength across (inter)disciplinary points of engagement with a welcome personal acuity."

"Plain Text adds to the impressive work of such computationally savvy theorists as Wendy Hui Kyong Chun, Alexander Galloway, Alan Liu, Rita Raley, and others to make a clear, forceful case for computational poetics as a necessary literary practice in the digital age. "

"Ask yourself: When I write on a computer, where does that writing reside? Is it there, on the word document, or is it buried deep inside the hard drive? Does literature actually end in cryptograms, in the layers of encoding deep beneath the liquid light of a laptop screen? These are the questions at the heart of Dennis Tenen's important and engaging book. We're lost among the copper, the cables, the formats, the terms and conditions. Tenen's Plain Text provides a lucid and legible map to our often vertiginous computational climate."

"This book is not just about opening the black box of digital reading and writing, the devices and programs we use to do so, or the digital turn of our culture. Written by an English and Comparative Literature professor who is also a trained engineer and a migrant having moved from post-Soviet Russia to the "global" North-West, Plain Text is a vibrant call to rethink the two culture debate in broad cultural and political terms."