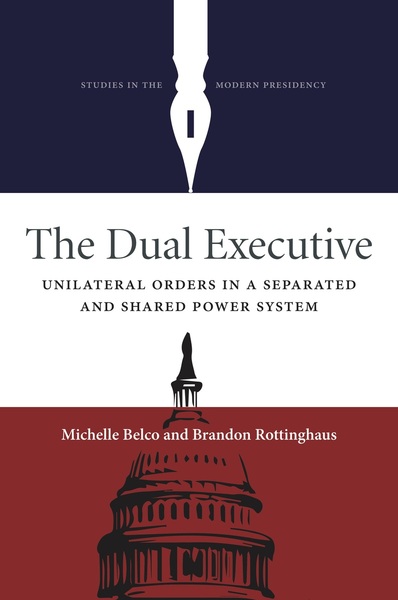 The Dual Executive
Unilateral Orders in a Separated and Shared Power System
Michelle Belco and Brandon Rottinghaus
SERIES: Studies in the Modern Presidency

Popular perception holds that presidents act "first and alone," resorting to unilateral orders to promote an agenda and head off unfavorable legislation. Little research, however, has considered the diverse circumstances in which such orders are issued. The Dual Executive reinterprets how and when presidents use unilateral power by illuminating the dual roles of the president. Drawing from an original data set of over 5,000 executive orders and proclamations (the two most frequently used unilateral orders) from the Franklin D. Roosevelt to the George W. Bush administrations (1933–2009), this book situates unilateral orders within the broad scope of executive–legislative relations. Michelle Belco and Brandon Rottinghaus shed light on the shared nature of unilateral power by recasting the executive as both an aggressive "commander" and a cooperative "administrator" who uses unilateral power not only to circumvent Congress, but also to support and facilitate its operations.

Michelle Belco is a Licensed Attorney and Lecturer of Political Science at the University of Houston.

Brandon Rottinghaus is Professor of Political Science at the University of Houston and Director of the Presidential Proclamations Project. He is the author of The Institutional Effects of Executive Scandal (2015) and The Provisional Pulpit: Modern Presidential Leadership of Public Opinion (2010).

"In The Dual Executive, Michelle Belco and Brandon Rottinghaus enrich and enliven our understanding of the president's powers of unilateral action. Expansive in their outlook and fair-minded in their approach, they open new intellectual space for creative exploration into the many purposes to which presidential power is put."

"In this timely book, Michelle Belco and Brandon Rottinghaus tackle one of the most pressing questions in contemporary politics: has presidential unilateralism fundamentally upset our constitutional system of checks and balances? By analyzing more than thirty-five years of empirical evidence and a wealth of historical examples, Belco and Rottinghaus provide fresh insight into the use and limits of unilateral power."

"In challenging the view that unilateral action always entails the furtherance of the chief executive's policy preferences at the expense of other actors, Belco and Rottinghaus have set forth an ambitious agenda for the field. The content of executive orders and proclamations matter, and it is no longer acceptable to treat them all as if they were solely reflections of the president's agenda.Belco and Rottinghaus's excellent new book is a giant leap in the right direction for the literature on presidential power."

In The Dual Executive: Unilateral Orders in a Separated and Shared Power System, Michelle Belco and Brandon Rottinghaus take us a long way toward the theory and methodology of a second generation of unilateral studies. In their well-written book, Belco and Rottinghaus integrate the routine orders that presidents issue as part of their administrative function, along with the more consequential, transformative orders that represent the powers of a command-oriented independent presidency."