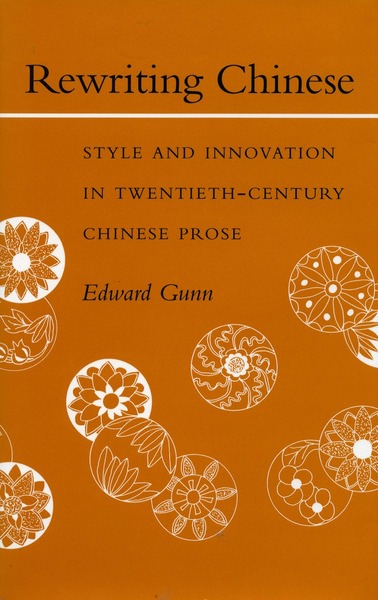 Everyone who has studied the upheavals of modern China knows that one of them has taken place in Chinese writing. Anyone who has read Chinese texts has also eventually pondered the possible significance of this upheaval for understanding the text, and vice versa. By analyzing formal features and speculating about their relevance to the construction of a modern Chinese culture, this book intends to show why the Chinese have come to write the way they do in this century.

Drawing on linguistic and rhetorical descriptions of language in writing as features of style, the author reviews the innovations that have been introduced into modern Chinese prose from both Chinese and foreign sources. The social history of these features, the attempts by various writers to assert cultural, political, and aesthetic principles through them and the resulting tensions and conventions that arise all form the critical framework for a study of Chinese prose literature and its most innovative authors in this century. The study is introduced and informed throughout by a succinct review o scholarly research from a wide range of disciplines relevant to the question of style as an object of study in contemporary criticism.

The book begins its approach to style with an Introduction that draws on Gestalt theory, information theory, and linguistics to develop a nuanced concept of what "style" is, one that gives adequate weight to the complex interplay of psychological, formal, and historical features at work. Two chapters then examine various aspects of convention, necessarily a historical phenomenon. The fourth chapter, by contrast, discusses the aesthetic prescriptions by which modern Chinese writers sought consciously to introduce innovation and points out the limitations of a prescriptive approach. The final two chapters study the strategies of specific writers.

Almost half the book is an Appendix that consists of a rich catalog of rhetorical and stylistic examples, drawn from a wide range of twentieth-century Chinese literary writing. These hundreds of examples, identified by the nomenclature of grammar, rhetoric, and sentence cohesion, constitute a veritable handbook of modern Chinese prose. The book also contains a Glossary of terms draw from rhetoric and linguistics.