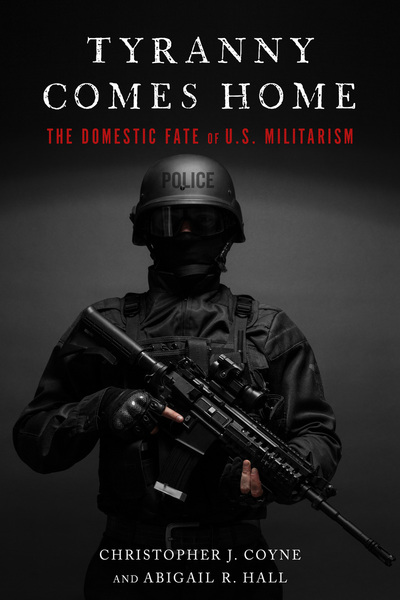 Bronze in the Current Events I (Political/Economic/Foreign Affairs) category in the 2019 Independent Publisher Book Awards.

Many Americans believe that foreign military intervention is central to protecting our domestic freedoms. But Christopher J. Coyne and Abigail R. Hall urge engaged citizens to think again. Overseas, our government takes actions in the name of defense that would not be permissible within national borders. Emboldened by the relative weakness of governance abroad, the U.S. government is able to experiment with a broader range of social controls. Under certain conditions, these policies, tactics, and technologies are then re-imported to America, changing the national landscape and increasing the extent to which we live in a police state.

Coyne and Hall examine this pattern—which they dub "the boomerang effect"—considering a variety of rich cases that include the rise of state surveillance, the militarization of domestic law enforcement, the expanding use of drones, and torture in U.S. prisons. Synthesizing research and applying an economic lens, they develop a generalizable theory to predict and explain a startling trend. Tyranny Comes Home unveils a new aspect of the symbiotic relationship between foreign interventions and domestic politics. It gives us alarming insight into incidents like the shooting in Ferguson, Missouri and the Snowden case—which tell a common story about contemporary foreign policy and its impact on our civil liberties.

Christopher J. Coyne is Associate Professor of Economics at George Mason University and Associate Director of the F. A. Hayek Program for Advanced Study in Philosophy, Politics, and Economics at the Mercatus Center. He is the author of Doing Bad by Doing Good: Why Humanitarian Action Fails (Stanford, 2013) and After War: The Political Economy of Exporting Democracy (Stanford, 2008).

Abigail R. Hall is Assistant Professor of Economics at the University of Tampa.

"Clearly and boldly argued, this is an excellent contribution to our understanding of the economics of interventionism."

"Many people believe that U.S. 'peacekeeping' efforts abroad help to protect American civil liberties at home. Coyne and Hall show just how mistaken that view is. I know of no other work that makes such a clear connection between foreign intervention and the erosion of domestic civil liberties."

"Coyne and Hall brilliantly reveal that a fatal coarsening comes with the rise of an empire. One can only respond with the cant phrase, heard often in these latter days, which would be better applied to peaceful, intellectual exchanges than to the corrupting enterprise of foreign intervention: 'Thank you for your service.'"

"An old German saying claims that losing a war is bad, but winning a war is worse. Coyne and Hall document one way in which that is the case: the architecture of social control created by militarism is easily adapted to domestic life. Tyranny Comes Home illustrates this phenomena in the United States, while offering a path to reclaiming the 'Great Republic.'"

"Tyranny Comes Home argues that a nation cannot act brutally in the world and still respect the rights and liberties of its own people. It is a wonderfully insightful look at the connections between the violence of American foreign policy and our shrinking democracy at home."

"An adept and engaging examination of the processes by which militaristic policy abroad can lead to the loss of civil liberties at home."

"A number of America's founding fathers expressed the view that foreign military ventures would come at a high cost. In Tyranny Comes Home, Christopher J. Coyne and Abigail R. Hall put this warning to the test: How have America's wars of choice and its colonial experiments affected the homeland and the power of the presidency? And what does economic theory have to say about the transformation from state to empire? Their analysis makes for an engrossing read, a remarkably demonstration of the foresight that went into the Constitution, and a stark depiction of the dangers that it faces today."

"Christopher J. Coyne and Abigail R. Hall have built a highly original and penetrating argument on a neglected topic that demands attention in the age of endless war. Their thorough analysis, understanding of history, and fresh correlations are insightful and a pleasure to read. We need more of this kind of creative bridge building."

"America's disastrous wars have taken a horrendous toll. Yet, Christopher J. Coyne and Abigail R. Hall powerfully demonstrate that the costs are even higher than we have recognized. Tyranny Comes Home is a brilliant and important book that transcends partisanship. The authors' call for anti-militarism and patriotism built on a critical attitude towards the security state can help to rescue America's democracy."

"This is an important and provocative exploration of an overlooked cost of militaristic foreign policy: domestic freedom. This well-researched and lively book is a must read for those concerned with the preservation of individual liberty and the perils of permanent war."

-- Daniel Ellsberg, author of Secrets: A Memoir of Vietnam and the Pentagon Papers and The Doomsday Machine: Confessions of a Nuclear War Planner

"Using cases ranging from militarizing police, using drones for surveillance, and exercising elements of torture in American prisons, Coyne and Hall lend an economic lens to their research to show how foreign interventions and domestic policy decisions are becoming increasingly intertwined—in their eyes at a significant cost to the American public....[T]he authors raise questions about how a country can act violently throughout the world while still claiming to respect the liberties and rights of its own citizens."

"This was an excellent expository text that I do believe was one of the most educational I have read in some time, and I thoroughly recommend it to students and practitioners of foreign policy, international relations, intelligence studies and strategic studies."

"[An] eye-opening account that should be read by every engaged citizen who cares about the future of the nation and global affairs."