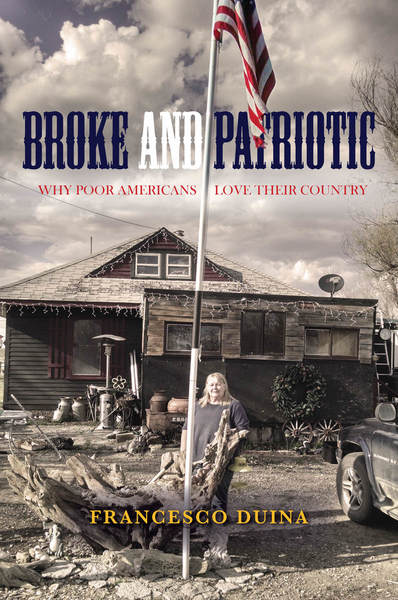 Why are poor Americans so patriotic? They have significantly worse social benefits compared to other Western nations, and studies show that the American Dream of upward mobility is, for them, largely a myth. So why do these people love their country? Why have they not risen up to demand more from a system that is failing them?

In Broke and Patriotic, Francesco Duina contends that the best way to answer these questions is to speak directly to America's most impoverished. Spending time in bus stations, Laundromats, senior citizen centers, homeless shelters, public libraries, and fast food restaurants, Duina conducted over sixty revealing interviews in which his participants explain how they view themselves and their country. He masterfully weaves their words into three narratives. First, America's poor still see their country as the "last hope" for themselves and the world: America offers its people a sense of dignity, closeness to God, and answers to most of humanity's problems. Second, America is still the "land of milk and honey:" a very rich and generous country where those who work hard can succeed. Third, America is the freest country on earth where self-determination is still possible.

This book offers a stirring portrait of the people left behind by their country and left out of the national conversation. By giving them a voice, Duina sheds new light on a sector of American society that we are only beginning to recognize as a powerful force in shaping the country's future.

"This is superlative ethnography, allowing voices too little heard to speak for themselves, and to do so with pride. Social understandings can be furthered more by this book than by any other at present in the marketplace."

"A superb book! Anyone who wants to know why poor Americans love their country should read this. The answers Duina finds to this question are startling and reveal deep and enduring beliefs in freedom, God, and the American Dream. The lessons Duina provides are especially important given the current state of American politics."

"An excellent, timely book, which can help us understand the results of the recent elections. The American poor do not envy the rich. They are proud to be Americans and derive personal dignity from membership in the nation. Rather than blame their poverty on society, they take responsibility for it. The elite talk in the great cities would not make sense to them. A sociological counterpart to Hillbilly Elegy."