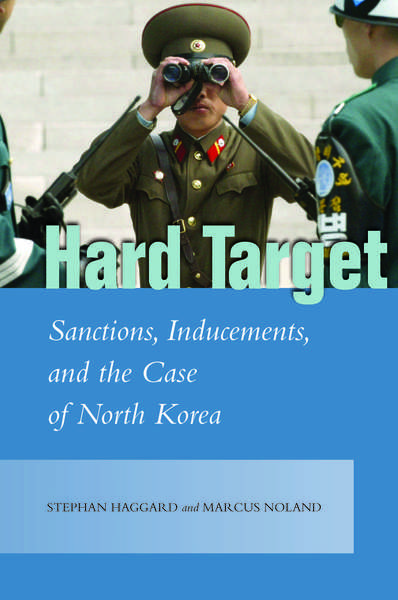 Because authoritarian regimes like North Korea can impose the costs of sanctions on their citizens, these regimes constitute "hard targets." Yet authoritarian regimes may also be immune—and even hostile—to economic inducements if such inducements imply reform and opening. This book captures the effects of sanctions and inducements on North Korea and provides a detailed reconstruction of the role of economic incentives in the bargaining around the country's nuclear program.

Stephan Haggard and Marcus Noland draw on an array of evidence to show the reluctance of the North Korean leadership to weaken its grip on foreign economic activity. They argue that inducements have limited effect on the regime, and instead urge policymakers to think in terms of gradual strategies. Hard Target connects economic statecraft to the marketization process to understand North Korea and addresses a larger debate over the merits and demerits of "engagement" with adversaries.

Marcus Noland is Executive Vice President and Director of Studies at the Peterson Institute for International Economics and Senior Fellow at the East–West Center. He is the author of Avoiding the Apocalypse (2000), which won the 2002 Masayoshi Ohira Memorial Prize.

"Hard Target makes an outstanding contribution to the study of the political economy of engagement with North Korea. Analytically rigorous, empirically rich, and far-reaching in its policy implications, this book is a must-read."

"Following the money, Stephan Haggard and Marcus Noland have carefully crafted an innovative study of the evolving political economy of North Korea. They provide important insights about the effectiveness of sanctions and engagement strategies. Amid an increasing application of sanctions, Hard Target contributes much needed sophistication and nuance to over-simplified debates about dealing with North Korea."

"Hard Target is an academic book in the most complimentary sense of the term....[It] is certainly a must-read for scholars and practitioners who claim some stake in the North Korea debate. Readers will appreciate Haggard and Noland's honest, but sobering assessment of the North Korean crisis and the results of sanctions and inducements."