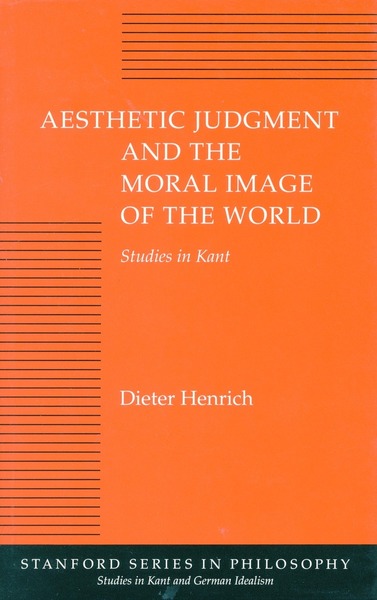 This is a collection of four essays on aesthetic, ethical, and political issues by Dieter Henrich, the preeminent Kant scholar in Germany today. Although his interests have ranged widely, he is perhaps best known for rekindling interest in the great classical German tradition from Kant to Hegel.

The first essay summarizes Henrich's research into the development of the Kant's moral philosophy, focusing on the architecture of the third Critique. Of special interest in this essay is Henrich's intriguing and wholly new account of the relations between Kant and Rousseau. In the second essay, Henrich analyzes the interrelations between Kant's aesthetics and his cognitive theories. His third essay argues that the justification of the claim that human rights are universally valid requires reference to a moral image of the world. To employ Kant's notion of a moral image of the world without ignoring the insights and experience of this century requires drastic changes in the content of such an image. Finally, in Henrich's ambitious concluding essay, the author compares the development of the political process of the French Revolution and the course of classical German philosophy, raise the general question of the relation between political processes and theorizing, and argues that both the project of political liberty set in motion by the French Revolution, and the projects of classical German philosophy remain incomplete.

Dieter Henrich is Professor of Philosophy at the University of Munich and the author or editor of more than thirty books.

"Henrich is one of today's leading scholars on classical German philosophy. A striking feature of his work is the combination of historical scholarship with deep concern about intellectual and ethical relevance of authors like Kant, Fichte, or Hegel. . . . The essays are clearly written and well translated. . . . Their scholarly mastery will be appreciated by students of Kant and German idealism."