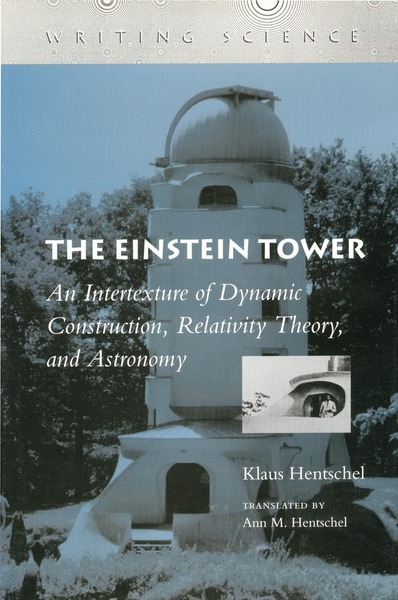 This book focuses on the "Einstein Tower," an architecturally historic observatory built in Potsdam in 1920 to allow the German astronomer Erwin Finlay Freundlich to attempt to verify experimentally Einstein's general theory of relativity. Freundlich, who was the first German astronomer to show a genuine interest in Einstein's theory, managed to interest his architect friend Erich Mendelsohn in designing this unique building. Freundlich's researches were not a success; he came to doubt the very theory he was attempting to prove. (Adequate technology to test Einstein's theory lay many decades in the future.) By contrast, as an experiment in modernist architecture, the building led to international fame for Mendelsohn.

To develop a full historical picture of this moment in the history of science, the book interweaves several descriptive levels: the biography of Freundlich; the social context in which he interacted with teachers, co-workers, students, his patrons (including Einstein), and scientific opponents; the cognitive aspects of his attempts to verify Einstein's theory; the political milieu within the Berlin scientific research community; and a cross-national comparison of astrophysics.

Other layers of the narrative include the place of the Einstein Tower in architectural history; economics and sociopsychological components of the Tower's financing and construction; the reception of the Tower and the theory; a historical examination of the Tower's research results; and the effect on Freundlich and on the work at the Tower of the National Socialists’ rise to power.

“In this compact and lively study, Hentschel weaves together elements of a story that conventional disciplinary divisions—history of physics, history of architecture, history of institutions—pull asunder. By deliberately focusing not on a theory, a person, or even an institution but rather a building, he is able to skip nimbly among these unusually disjoint subjects and approaches and to create a smooth and often fascinating, always illuminating, narrative out of these pieces.”—Lorraine Daston, University of Chicago

“Hentschel has succeeded in writing a very readable account of certain hitherto neglected aspects of the early history of general relativity, made more fascinating by the eccentric perspective that his account takes.”—Jürgen Renn, Max Planck Institute for the History of Science