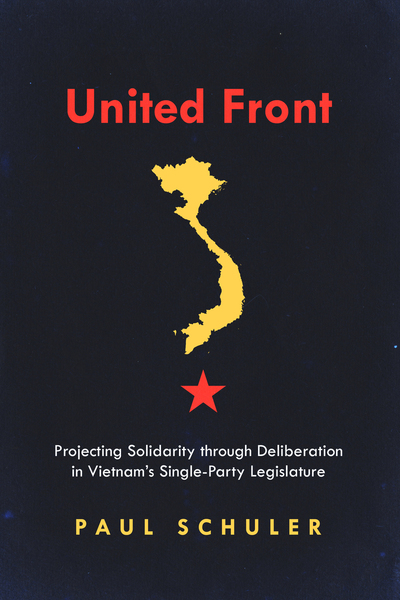 Conventional wisdom emerging from China and other autocracies claims that single-party legislatures and elections are mutually beneficial for citizens and autocrats. This line of thought reasons that these institutions can serve multiple functions, like constraining political leaders or providing information about citizens. In United Front, Paul Schuler challenges these views through his examination of the past and present functioning of the Vietnam National Assembly (VNA), arguing that the legislature's primary role is to signal strength to the public. When active, the critical behavior from delegates in the legislature represents cross fire within the regime rather than genuine citizen feedback. In making these arguments, Schuler counters a growing scholarly trend to see democratic institutions within single-party settings like China and Vietnam as useful for citizens or regime performance. His argument also suggests that there are limits to generating genuinely "consultative authoritarianism" through quasi-democratic institutions. Applying a diverse range of cutting-edge social science methods on a wealth of original data such as legislative speeches, election returns, and surveys, Schuler shows that even in a seemingly vociferous legislature like the VNA, the ultimate purpose of the institution is not to reflect the views of citizens, but rather to signal the regime's preferences while taking down rivals.

Paul Schuler is Assistant Professor in the School of Government and Public Policy at the University of Arizona.

"Why does a single-party state have well-developed electoral and legislative institutions? Schuler provides a compelling answer to this question in this persuasive, far-reaching account. His work pushes forward our understanding of institutions not only in one of the few remaining Communist states, but also in authoritarian regimes more broadly."

"A firecracker of a book and a critical contribution to scholarship on authoritarian institutions and Vietnamese politics. In punchy and thrilling prose, using deep knowledge and cutting-edge empirical tools, Schuler challenges existing theories that parliaments resolve informational problems for autocrats, arguing instead that they are better suited to signal dominance and promote popular legitimacy."

"As a study of political science, Schuler makes a major contribution by challenging the dominant view in scholarship that often conflates legislatures in single-party regimes with other authoritarian or hybrid regimes... Schuler has written an outstanding book that deserves to be read widely by both political scientists and Vietnam experts."