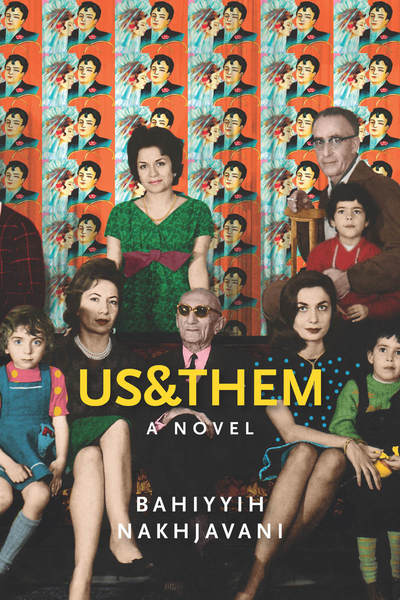 Lili and Goli have argued endlessly about where their mother, Bibijan, should live since the Iranian Revolution. They disagree about her finances too, which remain blocked as long as she insists on waiting for her son—still missing but not presumed dead yet—to return from the Iran–Iraq war. But once they begin to "share" the old woman, sending her back and forth between Paris and Los Angeles, they start asking themselves where the money might be coming from. Only their Persian half-sister in Iran and the Westernized granddaughter of the family have the courage to face up to the answers, and only when Bibijan finally relinquishes the past can she remember the truth.

A story mirrored in fragmented lives, Us&Them explores the ludicrous and the tragic, the venal and the generous-hearted aspects of Iranian life away from home. It is a story both familial and familiar in its generational tensions and misunderstandings, its push and pull of obligations and expectations. It also highlights how "we" can become "them" at any moment, for our true exile is alienation from others. Acclaimed author Bahiyyih Nakhjavani offers a poignant satire about migration, one of the vital issues of our times.

Bahiyyih Nakhjavani grew up in Uganda, was educated in the United Kingdom and the United States, and now lives in France. She is the author of The Woman Who Read Too Much (Redwood Press, 2015), The Saddlebag (2001), and Paper (2005), as well as non-fiction works about fundamentalism and education. Her novels have been published in French, Italian, Spanish, German, Dutch, Greek, Turkish, Hebrew, Russian, and Korean.

"A glitteringly poignant novel. Beautifully cadenced, drily acute about human relationships, it keeps global and local perfectly in balance and addresses one of the central topics of our time: how to live within the losses and suspensions of diaspora while grieving the dead, honouring the family and being as honest as we can."

—Ruth Padel, author of Where the Serpent Lives and Darwin—A Life in Poems, Judge of 2016 International Man Booker Prize

"With Swiftian wit and prose both pithy and poetic, Us&Them offers a searingly honest satirical image of Iranian society and its large diaspora. In the alchemy of Bahiyyih Nakhjavani's masterful narrative, this becomes a tale of the traumas of exile, and of the human condition in a troubled time."

"Us&Them is a timely exploration of the Iranian psyche, a nuanced reflection of the Iranian character: its largesse, its rich absurdity and genuine warmth, but also its complexity, its contradictions and internal conflicts. As an Iranian born in the U.K. I found it challenging, funny, moving and I'm now fretting about where I belong: am I one of 'us' or one of 'them'?"

"Sensitive, subtle, evocative. Bahiyyih Nakhjavani weaves threads of silk with her words, skillfully filling in the silences within and between cultures. It is a rare author who can write with such clarity of vision, compassion of heart and power of words and leave us readers in awe of her wisdom at the end."

—Elif Shafak, author of The Bastard of Istanbul and The Forty Rules of Love

UCLA Radio
Citizen of the English Language: An Interview with Bahiyyih Nakhjavani

EuropeNow
A Satire on the Iranian Diaspora: Interview with Author Bahiyyih Nakhjavani