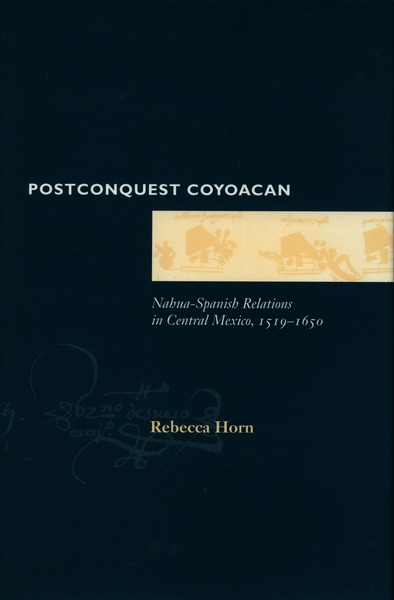 This book studies Nahuas and Spaniards in the central Mexican jurisdiction of Coyoacan from the Spanish conquest until 1650, crafting a multidimensional portrait of their relations in both institutional and informal settings.

Initially, the primary site of Nahua-Spaniard contact was institutional, as Spanish authorities attempted to reshape local practices to fit their own notions and needs, changing regional states into Spanish municipalities and Christian parishes, local ruling bodies into town councils, and tribute goods into standardized payments in coin. These efforts were never entirely successful, as Nahuas only partially adjusted their own practices when faced with the changes initiated by the Spaniards. The author explores the ways in which new forms of government and economic customs developed, drawing on both Nahua and Spanish traditions.

Nahua-Spanish contact was not limited to formal political and economic settings. The author describes the development of Spanish estates and the market economy, which opened up a new arena of cultural contact in the countryside. A growing number of Nahuas found themselves working for a Spanish landowner, acquiring a horse for peddling fruit from a local Spaniard, or selling land to a newly-arrived Spaniard. The Spanish land market altered Nahua land tenure and led to the loss of much Nahua land. The author demonstrates how Nahua practices came into play as they resorted to indigenous concepts of land tenure to justify the sale of land or of legal process to formalize it.

In bringing Nahuas and Spaniards together in this study, the book explores the changing contours of their relationship in Central Mexico, emphasizing informal interethnic contact in the making of both the Spanish colonial economy and postconquest Nahua society.

Rebecca Horn is Associate Professor of History at the University of Utah.

"A valuable contribution to the study of colonial Mexican history, this is the first full-length study to address both components of colonial Mexican society—indigenous and Hispanic—in a specific region over a substantial period of time. The scholarship is extensive, exacting, and thorough."

"A sound and fundamental work that will remain an important source of reference for many years. . . . An excellent reference for anyone researching early indigenous/Spanish interactions."