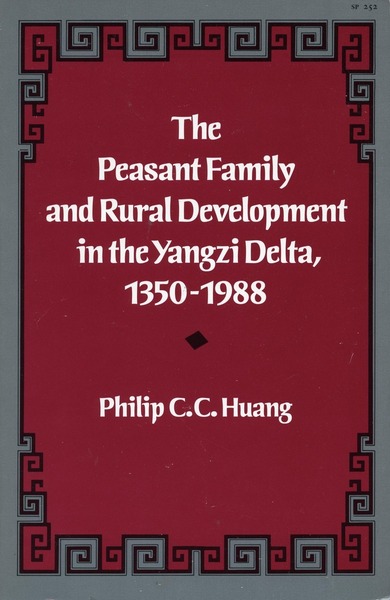 How can we account for the durability of subsistence farming in China despite six centuries of vigorous commercialization from 1350 to 1950 and three decades of collectivization between 1950 to 1980? Why did the Chinese rural economy not undergo the transformation predicted by the classical models of Adam Smith and Karl Marx? In attempting to answer this question, scholars have generally treated commercialization and collectivization as distinct from population increase, the other great rural change of the past six centuries. This book breaks new ground in arguing that in the Yangzi delta, China's most advanced agricultural region, population increase was what drove commercialization and collectivization, even as it was made possible by them. The processes at work, which the author terms involutionary commercialization and involutionary growth, entailed ever-increasing labor input per unit of land, resulting in expanded total output but diminishing marginal returns per workday. In the Ming-Qing period, involution usually meant a switch to more labor-intensive cash crops and low-return household sidelines. In post-revolutionary China, it typically meant greatly intensified crop production. Stagnant or declining returns per workday were absorbed first by the family production unit and then by the collective. The true significance of the 1980's reforms, the author argues, lies in the diversion of labour from farming to rural industries and profitable sidelines and the first increases for centuries in productivity and income per workday. With these changes have come a measure of rural prosperity and the genuine possibility of transformative rural development. By reconstructing Ming-Qing agricultural history and drawing on twentieth-century ethnographic data and his own field investigations, the author brings his large themes down to the level of individual peasant households. Like his acclaimed The Peasant Economy and Social Change in North China (1985), this study is noteworthy for both its empirical richness and its theoretical sweep, but it goes well beyond the earlier work in its inter-regional comparisons and its use of the pre- and post-1949 periods to illuminate each other.