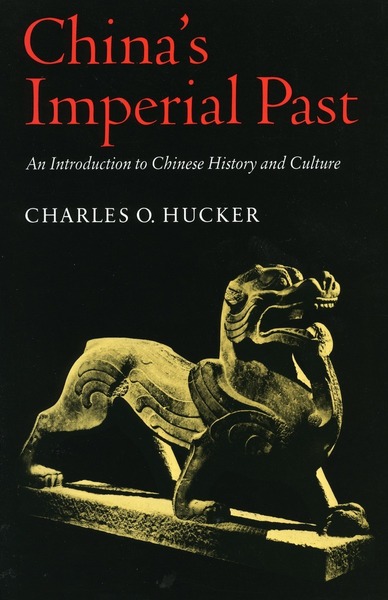 China’s Imperial Past
An Introduction to Chinese History and Culture
Charles O. Hucker

A work unique in the sweep of its design and scope, intended expressly for the general reader interested in human history and culture, this is a vivid panoramic survey of the vast course of Chinese civilization from prehistory to 1850, when the old China began the agonizing transition to the new. Historical surveys of China tend to be dynasty-by-dynasty chronicles with a profusion of names and dates and occaisional cultural tidbits, or to concentrate on the period from earliest times to the Han dynasty (or the T'ang), giving only scant coverage to the last thousand years. China's Imperial Past is different. Not only does it treat the three major periods of Chinese history at roughly equal length, weaving all their complexity into a balanced, integrated whole, but it gives ample space to China's magnificent literary and artistic achievements.

The author's approach is primarily interpretive, emphasizing patterns of change and development rather than factual details, but he never loses sight of the particularities that made traditional Chinese civilization one of the richest in human history. Especially notable are the many translations of Chinese poetry, among them more than twenty exquisite poems from the great poets of the T'ang.

The author divides Chinese history into three major epochs: a formative age, from high antiquity to the unification of China under the Ch'in in the third century B.C.; an early imperial age, from the Han dynasty (202 B.C.-A.D. 220) through the T'ang (618-907) and its breakdown; and a later imperial age, from the Sung dynasty (960-1279) to the mid-nineteenth century. Each major epoch is considered in topical chapters—on general history, political institutions, socioeconomic organization, religion and thought, and literature and the arts. A brief Epilogue comments on aspects of Chinese history since 1850.

The book includes 47 plates, eight maps, and various charts, and as appendixes and unusually detailed chronological table, notes on the Chines language, and suggestions for supplementary reading.

"An admirable success. It is the embodiment of great Sinological acumen and experience and of a lovingly painstaking scholarship, beautifully presented. Moreover, it is a book that deploys its learning gracefully and succinctly, with a rhetorical modesty that is likely to wear very well on its many future readers. . . . Professor Hucker has produced a most attractive harvest of the many labors of his distinguished scholarship and teaching career, and we should be grateful."

"The genius of the book lies in its organization. . . . It is arranged in such a way that one can read it straight through for a comprehensive view of China's past; or one can read it topically, as a record of major events, or as a political-institutional history, or socio-economic history, or the history of ideas, or literary or art history. . . . It is an eminently sound introduction to its subject, a work compiled with evident thought and care."

"[The] achievement of Professor Hucker is a formidable one. His work is a beautifully balanced one, organized with logic and clarity. His interpretations, if leaning to the safe side, are invariably sound. His erudition is carried lightly and there is found throughout, an awareness of the needs of the student. . . . In sum, Hucker has produced a readable and comprehensive text. It will undoubtedly become a standard in college courses and it can be highly recommended to anyone who seeks a solid yet painless introduction to the civilization of traditional China."

"Charles O. Hucker is not only a name, it is a quality mark, and to Chinese history China's Imperial Past is an excellent introduction. It is an extremely well written and well structured account of China's political, social, economic and cultural history from the beginning through the first half of the nineteenth century."

"The book is an ambitious one, attempting to encompass over four thousand years of Chinese history and culture in slightly more than four hundred pages. Yet in section after section we are treated to well-organized, concise, yet meaty presentations of figures, events, works of art, or analytical interpretation. . . . Hucker hasn't allowed political history to monopolize his story, although it does form the backbone. But he obviously has a weakness for literature, which, fortunately for the reader, he indulged. . . . Like all good history, China's Imperial Past does deepen the present, enhance our awareness of what is truly new, and entertains in the process. Not a bad bargain."

"China's Imperial Past fills a great need in the area of Chinese studies, the need for a readable and accurate introduction for both the layman and the beginner, for a book without overpowering erudition or demeaning "shallowness. The author has brilliantly accomplished this remarkable and difficult tour de force. He has produced a book which not only provides the reader with a wealth of information on all aspects of the civilization of China but which also stimulates his desire to read other, more detailed works."

"Handsome and readable. . . . Not since Latourette's The Chinese: Their History and Culture have we had such an even-handed review of Chinese history as this volume provides."

"Professor Charles O. Hucker, author of two very stimulating books on Ming history and editor of one book on Ming government and institutions, has now produced another opus magnum on China's imperial past. . . . Professor Hucker has produced a book which is not only suitable for students in the English-speaking world but demonstrates to sinologists, teachers and students alike that Chinese history in the tung-shih style can be written in this way."

"The book is an impressive tour de force of skillful organization, clarity, and precision; the style is quiet, concise, and unambiguous. Hucker's coverage is strikingly comprehensive. . . . His incorporation of the major findings and issues of recent research is meticulous and well proportioned."

"China's Imperial Past, by Charles O. Hucker, is the best introduction to Chinese culture from earliest times to the 19th century."