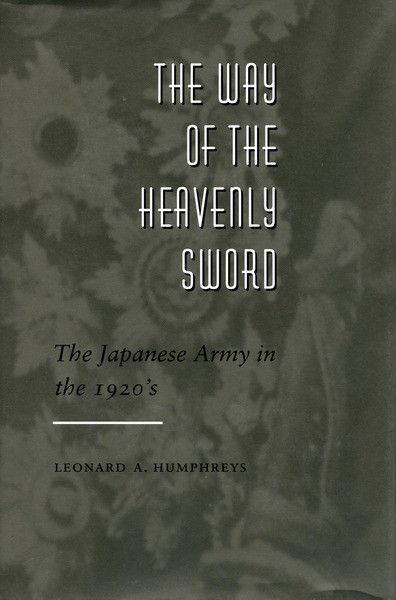 The Way of the Heavenly Sword
The Japanese Army in the 1920's
Leonard A. Humphreys

This text examines the history of the Japanese army in the 1920s. In this decade, the 'Meija military system' disintegrated and was replaced by a new 'Imperial Army System'. The Japanese victory over Russia in 1905 had changed the direction of Japanese military thought from almost total dependence on western rational military thinking to a more traditional reliance on morale as the preponderant factor for victory in combat. The author focuses on the intense and complex struggle which took place over leadership of the Army, the application of the principle of the primacy of morale, and the quite contradictory but obvious necessity for the army to modernize. This internal turmoil was intensified by a background of increasingly difficult economic circumstances, and the terrible effects of the great earthquake and fire of 1923. This crucial decade of Japanese history set the stage for the shattering events of the 1930s and 1940s.

"Amazingly, this incisive and well-written work is the first book-length account in English of the Japanese army in a crucial period before World War II. Based on an extraordinary number of Japanese sources and on interviews with participants in the events he describes, Humphreys's book will be important for scholars both of modern Japan and of military organizations in general. His perspective as a longtime U.S. army officer adds to the quality of his analysis and the depth of his scholarship."

"The 1920s is always presented as a low point of military influence in Japan, a kind of anomalous pause before the dive into total war. Humphreys seeks to bridge that gap, and in doing so, he succeeds admirably in showing that the army continued to evolve even as it receded from center stage."