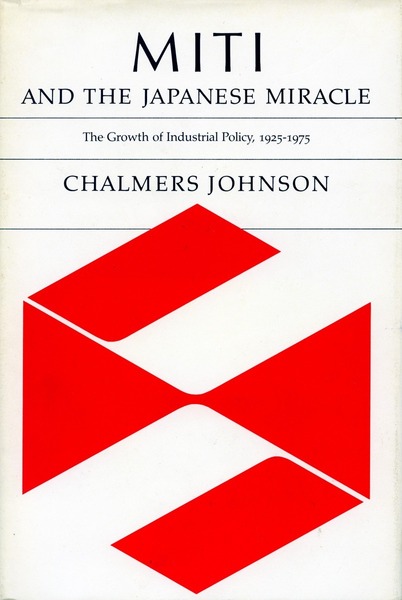 MITI and the Japanese Miracle
The Growth of Industrial Policy, 1925-1975
Chalmers Johnson

The focus of this book is on the Japanese economic bureaucracy, particularly on the famous Ministry of International Trade and Industry (MITI), as the leading state actor in the economy. Although MITI was not the only important agent affecting the economy, nor was the state as a whole always predominant, I do not want to be overly modest about the importance of this subject. The particular speed, form, and consequences of Japanese economic growth are not intelligible without reference to the contributions of MITI. Collaboration between the state and big business has long been acknowledged as the defining characteristic of the Japanese economic system, but for too long the state's role in this collaboration has been either condemned as overweening or dismissed as merely supportive, without anyone's ever analyzing the matter.

The history of MITI is central to the economic and political history of modern Japan. Equally important, however, the methods and achievements of the Japanese economic bureaucracy are central to the continuing debate between advocates of the communist-type command economies and advocates of the Western-type mixed market economies. The fully bureaucratized command economies misallocate resources and stifle initiative; in order to function at all, they must lock up their populations behind iron curtains or other more or less impermeable barriers. The mixed market economies struggle to find ways to intrude politically determined priorities into their market systems without catching a bad case of the "English disease" or being frustrated by the American-type legal sprawl. The Japanese, of course, do not have all the answers. But given the fact that virtually all solutions to any of the critical problems of the late twentieth century—energy supply, environmental protection, technological innovation, and so forth—involve an expansion of official bureaucracy, the particular Japanese priorities and procedures are instructive. At the very least they should forewarn a foreign observer that the Japanese achievements were not won without a price being paid.

"There are, unfortunately, few books on Japanese politics and economics that deserve to be widely recommended to nonspecialists from either discipline, let alone to the generally informed public. Happily, Chalmers Johnson's excellent study is one of those rare gems that will demand attention from wide audiences. It is a sparkling addition to scholarship and literacy."

"Johnson's penetrating institutional analysis—full of sideswipes against cultural explanations—stimulated generations of research into the variations among capitalist systems, in Asia and beyond."