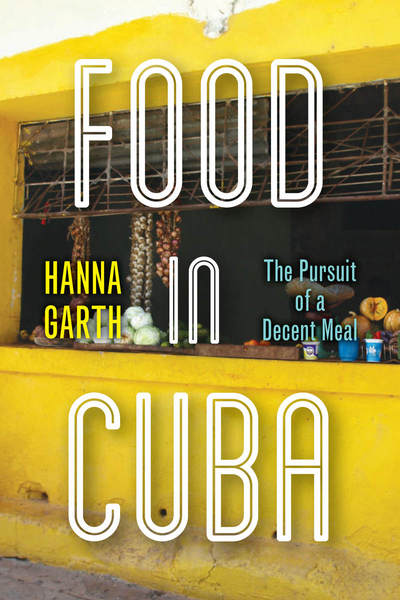 Food in Cuba follows Cuban families as they struggle to maintain a decent quality of life in Cuba's faltering, post-Soviet welfare state by specifically looking at the social and emotional dimensions of shifts in access to food.

Based on extensive fieldwork with families in Santiago de Cuba, the island's second largest city, Hanna Garth examines Cuban families' attempts to acquire and assemble "a decent meal," unraveling the layers of household dynamics, community interactions, and individual reflections on everyday life in today's Cuba. With the collapse of the Soviet Union in the 1990s and the subsequent loss of its most significant trade partner, Cuba entered a period of economic hardship. Although trade agreements have significantly improved the quantity and quality of rationed food in Cuba, many Cubans report that they continue to live with food shortages and economic hardship. Garth tells the stories of families that face the daily challenge of acquiring not only enough food, but food that meets local and personal cultural standards. She ultimately argues that these ongoing struggles produce what the Cuban families describe as "a change in character," and that for some, this shifting concept of self and sense of social relation leads to a transformation in society. Food in Cuba shows how the practices of acquisition and the politics of adequacy are intricately linked to the local moral stances on what it means to be a good person, family member, community member, and ultimately, a good Cuban.

Hanna Garth is Assistant Professor of Anthropology at the University of California, San Diego.

"Garth's in-depth and intimate ethnography portrays the shortcomings in Cuba's welfare system, and the profound consequences for the way people eat and think of themselves as Cuban. Presenting the stories of highly resourceful individuals and communities, Garth shows us that the Cuban experience and post-Soviet lives cannot be decoupled from everyday food practices."

—Megan A. Carney, author of The Unending Hunger: Tracing Women and Food Insecurity across Borders

"In her rich ethnography of food 'insecurity' in a place where no one starves, Hanna Garth traces the daily practices of food acquisition and the effects of inadequacy on identity. Garth depicts the experience of dependence upon a faltering socialist infrastructure, recording a longing for what was before, discontent with the seemingly changeless present, and a hope for future possibilities."

—Nancy J. Burke, author of Health Travels: Cuban Health(care) On and Off the Island

—Emily Yates-Doerr, Society for the Anthropology of Food and Nutrition

"This is an ethnography rich with thick description about the politics of adequacy as seen through the lens of household food acquisition....Food in Cuba opens our eyes to all that people go through to acquire the foods they desire."

"Garth accessibly addresses important theoretical and political debates while anchoring every insight in rich ethnographic detail. She achieves a sympathetic and nuanced portrait of people who struggle more than they should for the basic elements of life while still engaging in complex social critique and political analysis and acts of solidarity, as well as, against the odds, finding ways to flourish."

"[Food in Cuba] expands our understanding of food security, showing that it must mean more than simply access to sufficient nutrients for survival.By turning our attention to food acquisition, Garth's ethnography raises new questions about the kind of systems that people rely upon to produce enough or sufficient food."

"[Food in Cuba] presents a complex picture of the tension between the socialist state and Cuban women....Garth successfully employs experiences from her fieldwork to the reader's benefit, expertly conveying the emotional highs and depressive lows that different individuals feel as they battle every day to produce a decent meal. Recommended."

"As Santiagueros insist, alimentary dignity is an essential ingredient of mental health and well-being. Garth beautifully demonstrates how such notions of health deserve both analytical rigor and political weight in discussions of the body, the self, and the state in marginalized Caribbean communities."

"Food in Cuba is a thought-provoking ethnography that should appeal to multiple audiences, including policy makers, health professionals, and scholars interested in Cuba, for its critical perspective on narrow definitions of food security and for its valuable perspective on how chronic food shortages impact mental health and social dynamics on the island."

"Garth's study of marginalized Santiagueros and their 'ingestive practices', portrays a particular kind of living, involving intimate socialities and intimate performances, where one is constantly negotiating the fine line of acting ethical and losing one's Cubanidad. It is an important part of a larger body of work in anthropology that portrays the urban precariat making do in the grey zone."

"Food in Cuba demonstrates what the anthropology of food has to offer to more technical approaches to global food security—showing that food is important for much more than satisfying basic nutritional standards. Garth's book also captures a political understanding of food that is critical: feeling. She does this with a deep respect for the people of Santiago, especially women who do everything they can to create a decent meal."