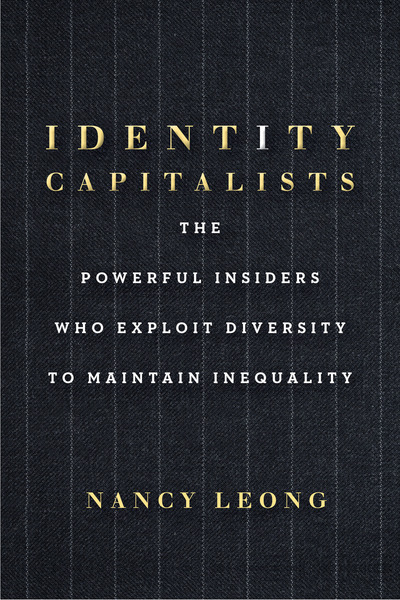 Nancy Leong reveals how powerful people and institutions use diversity to their own advantage and how the rest of us can respond—and do better.

Why do people accused of racism defend themselves by pointing to their black friends? Why do men accused of sexism inevitably talk about how they love their wife and daughters? Why do colleges and corporations alike photoshop people of color into their websites and promotional materials? And why do companies selling everything from cereal to sneakers go out of their way to include a token woman or person of color in their advertisements?

In this groundbreaking book, Nancy Leong coins the term "identity capitalist" to label the powerful insiders who eke out social and economic value from people of color, women, LGBTQ people, the poor, and other outgroups. Leong deftly uncovers the rules that govern a system in which all Americans must survive: the identity marketplace. She contends that the national preoccupation with diversity has, counterintuitively, allowed identity capitalists to infiltrate the legal system, educational institutions, the workplace, and the media. Using examples from law to literature, from politics to pop culture, Leong takes readers on a journey through the hidden agendas and surprising incentives of various ingroup actors. She also uncovers a dire dilemma for outgroup members: do they play along and let their identity be used by others, or do they protest and risk the wrath of the powerful?

Arming readers with the tools to recognize and mitigate the harms of exploitation, Identity Capitalists reveals what happens when we prioritize diversity over equality.

Nancy Leong is Professor of Law at the University of Denver Sturm College of Law. Leong's research has been featured in a variety of publications, including the Washington Post, The New York Times, The Atlantic, Slate, and Salon.

"Stunning in its originality and breadth. Leong writes magnificently, using powerful examples to illustrate each point, reminding us of the need for care and authenticity."

"This book zeroes in on something we've all experienced but no one before has named, offering a new perspective on tokenism and institutional virtue signaling and uncovering the more unsettling side of racial diversity."

—Richard Ford, author of Universal Rights Down to Earth

"Puts on display just how much we trade on identity. Whether through misguided judicial decisions, tasteless diversity schemes, or disturbing encounters, Leong shows us that the price we pay is too high."

"Nancy Leong moves past assumptions that the embrace of identity is always a positive good, and into a clear-eyed assessment of the ways that disingenuously instrumental use of identity displaces substantive reform and alienates Americans from each other. This is an invaluable read."

"A searching look at theway powerful insiders, and some outsiders, exploit identity for their own benefit. Leong pushes each of us to consider how we are all part of the system of identity capitalism."

—Angela Onwuachi-Willig, author of According to Our Hearts

"Entertaining, accessible, and thought-provoking, this book expertly weaves the personal with the political, and individual relationships with institutional hierarchies. Instead of just exposing the prevalence and problem of identity capitalism, it helps the reader think about practical solutions."

"The term 'identity capitalism' should take its place alongside 'white fragility' and 'unconscious bias' as part of the indispensable vernacular of civil and human rights. To engage with this unanswerable critique is to see that we are all identity capitalists now."