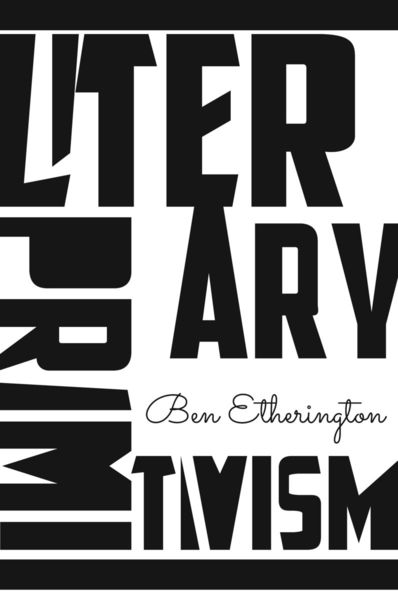 Winner of the 2018 AUHE Prize for Literary Scholarship, sponsored by Australian University Heads of English.

This book fundamentally rethinks a pervasive and controversial concept in literary criticism and the history of ideas. Primitivism has long been accepted as a transhistorical tendency of the "civilized" to idealize that primitive condition against which they define themselves. In the modern era, this has been a matter of the "West" projecting its primitivist fantasies onto non-Western "others." Arguing instead that primitivism was an aesthetic mode produced in reaction to the apotheosis of European imperialism, and that the most intensively primitivist literary works were produced by imperialism's colonized subjects, the book overturns basic assumptions of the last two generations of literary scholarship.

Against the grain, Ben Etherington contends that primitivism was an important, if vexed, utopian project rather than a form of racist discourse, a mode that emerged only when modern capitalism was at the point of subsuming all human communities into itself. The primitivist project was an attempt, through art, to recreate a "primitive" condition then perceived to be at its vanishing point. The first overview of this vast topic in forty years, Literary Primitivism maps out previous scholarly paradigms, provides a succinct and readable account of its own methodology, and presents critical readings of key writers, including Aimé Césaire, Frantz Fanon, D. H. Lawrence, and Claude McKay.

Ben Etherington is a lecturer in Literary Studies at Western Sydney University.

"Etherington's is a bold and cohesive argument, one that is aware but by no means a reiteration of the by-now-standard defenses and critiques of various modes of primitivism. One might have thought that enough had been said on the topic, but this is a new and important, even decisive intervention."

"Literary Primitivism is a highly original, detailed, and compelling investigation of a series of canonical works of modernist literature, one that proposes a novel refashioning of the primitivist impulse."

"The book... forwards the provocative thesis that primitivism, when properly periodized and reconceptualized, can have a politically progressive and decolonizing effect. This is an audacious, against-the-grain theoretical move that transforms primitivism from something offensive or misguided that is to be wholly avoided into an aesthetic and political tool that can be effectively deployed in decolonizing struggles against a racist and imperialist capitalism."

"Long deployed as the centrepiece of arguments about modernism's racist, imperialist impulses, it has become easy to dismiss [primitivism] out of hand as a classic instance of what we would now call Western cultural appropriation. Ben Etherington's Literary Primitivism offers a powerful and persuasive rebuff to this conventional wisdom."

"Literary Primitivism now deals squarely for the first time with the sociological and historical underpinnings of modern literature's search for an unmediated primitive. Ben Etherington sets out to regain what aspects of the primitivist project survive post-structuralism and postmodernity, with their devastating critique of mediated (manipulated) representation. He concludes that the most successful and relevant works move beyond representation and seek instead to re-enact the experiential process by which the nonsynchronous primitive remnant (Ernst Bloch) is activated, perceived in its immediacy and transformed in its trajectory through the text.....Marxist criticism at its best."

"The issue of primitivism is a briar patch, no matter how one approaches it, and Ben Etherington's Literary Primitivism does not shrink from the task....Etherington wants nothing less than to revise from the ground up, so to speak, seeing literary primitivism as not an imperialist act against oppressed peoples but as a subversive aesthetic that the colonized themselves conceived in order to undermine Western imperialist hegemonies."

"To challenge 'the consensus view that primitivism is only a bad thing', [Etherington] approaches the notion as a utopian project of restoration that does not rely on the Other, but on its opposition to global capitalism....Literary Primitivism's claims seem to us to be particularly important in offering a fruitful response to contemporary debates, such as that concerning cultural appropriation. B. Etherington not only succeeds in reappraising the concept in a manner that is relevant, responsible, and historically situated, but, above all, he makes it into a tool for a decolonizing and decolonial critique. Insofar as it serves a project of emancipation, the use of the term "primitivism" in literary theory is given new and stimulating horizons."

"A landmark work of dialectical criticism, this bold study should be a required reading for any scholar of primitivism, postcolonial studies, Marxism, or world literature, and indeed for anyone interested in twentieth-century literary, intellectual, and cultural history more broadly."

"Etherington salvages the aesthetic project of primitivism from the critical disrepute into which it has fallen....[He] makes a compelling case for understanding primitivism as an example of what philosopher Ernst Bloch terms concrete utopia, or the real possibility of another world buried in the historical misery of the present."

"Ben Etherington has revisited the important and highly visible, yet curiously neglected, topic of literary primitivism Etheringtonis properly respectful of the cultural turn represented by Said but resists the tendency to such sweeping judgements. Indeed, he makes the case for a serious use of primitivist motifs precisely by discriminating it from more naïve or defective instances. For this purpose, he gives close readings in turn of Aimé Césaire, D. H. Lawrence and Claude McKay Etherington offers [The Plumed Serpent]as the primary instance of Lawrence's primitivism Etherington is surely right to see it as a complex and illuminating instance of modern primitivism. It is best read as a utopian thought experiment although this constantly conflicts with the mode of historical realism in which it is conceived. Or to express the same point more positively, it is the work in which Lawrence pushed his primitivist speculation to its limits and tested it within, or against, the realism of the novel form."