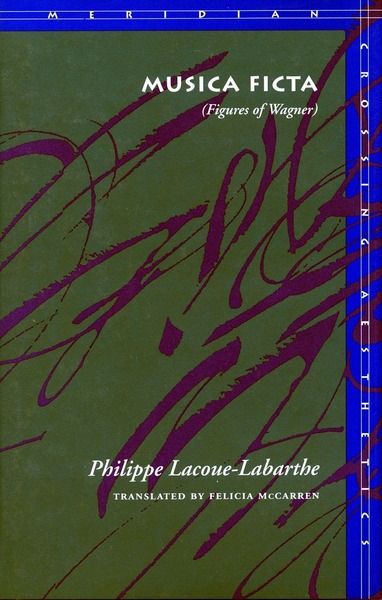 This is a pioneering attempt to rearticulate the relationship between music and the problems of mimesis, between presentation and re-presentaion. Four "scenes" comprise the book, all four of them responses to Wagner: two by French poets (Baudelaire and Mallarme), two by German philosophers (Heidegger and Adorno).

It is dificult to realize how profoundly Wagner affected the cultural and ideological sensibilities of the nineteenth century. Wagnerism rapidly spread throughout Europe, partly because of Wagner's propagandizing talent and the zeal of his adherents. But the main reason for his ascendance was the sudden appearance of what the century had desperately tried to produce since the beginnings of Romanticism - a work of art on the scale of great Greek and Christian art. At last, here it was: the secret of what Hegel called the "religion of art" rediscovered.

The first two scenes of the book present a historical sequence that is punctuated by the Franco-Prussian War and the Paris Commune, in which the universal unbridling of nations and classes is prefigured. The second two register certain effects of Wagnerism that are not just ideological but make themselves felt in a new political configuration of the "national" and the "social."

"This is a remarkable book. Not since Theodor Adorno has a theoretical work approached music in as broad, incisive and provocative a way as does Lacoue-Labarthe's Musica Ficta. The book opens up an entirely new perspective for reinterpreting the relations between music, theater, literature, and the philosophical-aesthetical tradition that has largely governed our understanding of those media. For the first time, to my knowledge, recent analyses of representation are brought to bear on the function of music, revealing its particular affinities to theatricality. Musica Ficta breaks new ground."

"A remarkable book. Not since Theodor Adorno has a theoretical work approached music in as broad, incisive, and provocative a way. The book opens up an entirely new perspective for reinterpreting the relations between music, theater, literature, and the philosophical-aesthet ic tradition that has largely governed our understanding of those media."

"Lacoue-Labarthe's work is a thought-provoking book: the reader embarks on an intellectual journey that draws connections between music, theater, aesthetics, philosophy, and history from ancient Greece to the present. . . . Lacoue-Labarthe offers a point of departure for a new aesthetic of art, one appropriate to the philosophical problems of the 20th Century."