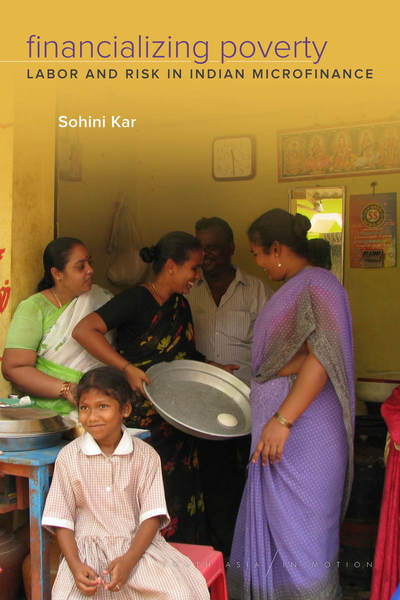 Microfinance is the business of giving small, collateral-free loans to poor borrowers that are paid back in frequent intervals with interest. While these for-profit microfinance institutions (MFIs) promise social and economic empowerment, they have mainly succeeded at enfolding the poor—especially women—into the vast circuits of global finance. Financializing Poverty ethnographically examines how the emergence of MFIs has allowed financial institutions in the city of Kolkata, India, to capitalize on the poverty of its residents.

This book reveals how MFIs have restructured debt relationships in new ways. On the one hand, they have opened access to new streams of credit. However, as the network of finance increasingly incorporates the poor, the "inclusive" dimensions of microfinance are continuously met with rigid forms of credit risk management that reproduce the very inequality the loans are meant to alleviate. Moreover, despite being collateral-free loans, the use of life insurance to manage the high mortality rates of poor borrowers has led to the collateralization of life itself. Thus the newfound ability of the poor to use MFI loans has entrapped them in a system dependent not only on their circulation of capital, but on the poverty that threatens their lives.

Sohini Kar is Assistant Professor of International Development at the London School of Economics.

"Among the many critics of the World Bank's mantra that financial inclusion will solve the problems of the poor, few voices are as impactful as Sohini Kar's. With gripping stories, ethnographically-informed nuance, and the theoretically sophisticated way in which it 'joins the dots,' her book doesn't typify microfinance as simply good or bad. Rather, it shows how debt enfolds people into globalized financial networks, transforming them into little more than balance sheet figures to be reckoned by calculators of financial risk."

—Deborah James, The London School of Economics and Political Science

"In this fresh investigation that should prove fascinating for specialists and generalists alike, Sohini Kar has beautifully rendered much hard-won and intensely illuminating ethnographic data into compelling and jargon-free prose. She convincingly pushes us to see an 'emergent ethic of capitalism,' embodied in a variety of creditor techniques for enfolding—and seeking profit from—a vast 'informal' economy humming along in India."

"Kar's book, an ethnographic study of borrowers, debt collectors, and loan managers in Kolkata, one of India's most populated cities, provides grounds for skepticism. Loans are meant to create sustainable businesses, but the precariousness of the borrowers' existence inevitably leads to funds being diverted to alternative, less-productive activities. When repayment becomes tenuous, problems arise among borrower groups and between borrowers and debt collectors....Highly recommended."

"[Financializing Poverty] is a critical study of microfinance, but it is not an assessment of whether microfinance works for large populations.It is, rather, a study about whom it works for, and how.It is a study about society rather than the optimal design of an economic institution. And as such, it is an original and significant contribution to the literature."––Tirthankar Roy, H-Asia

"In this incisive book, Sohini Kar seeks to link processes and events in the world of global and national finance to credit regimes that shape the lives of urban poor on the periphery....her ethnographic insights combine extremely well with literature on the political economy and anthropology of finance."