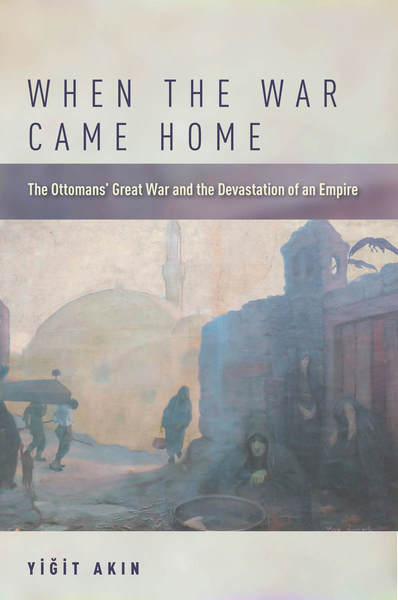 Winner of the 2019 The Tomlinson Book Prize, sponsored by the World War One Historical Association (WW1HA).

The Ottoman Empire was unprepared for the massive conflict of World War I. Lacking the infrastructure and resources necessary to wage a modern war, the empire's statesmen reached beyond the battlefield to sustain their war effort. They placed unprecedented hardships onto the shoulders of the Ottoman people: mass conscription, a state-controlled economy, widespread food shortages, and ethnic cleansing. By war's end, few aspects of Ottoman daily life remained untouched.

When the War Came Home reveals the catastrophic impact of this global conflict on ordinary Ottomans. Drawing on a wide range of sources—from petitions, diaries, and newspapers to folk songs and religious texts—Yiğit Akın examines how Ottoman men and women experienced war on the home front as government authorities intervened ever more ruthlessly in their lives. The horrors of war brought home, paired with the empire's growing demands on its people, fundamentally reshaped interactions between Ottoman civilians, the military, and the state writ broadly. Ultimately, Akın argues that even as the empire lost the war on the battlefield, it was the destructiveness of the Ottoman state's wartime policies on the home front that led to the empire's disintegration.

Yiğit Akın is Assistant Professor of History at Tulane University.

"When the War Came Home is an authoritative social history among the many recent works on the Ottoman experience of World War I. Based on an imaginative array of sources, Yiğit Akın portrays meticulously and eloquently the upended lives of civilians and soldiers in the morass of the Middle East's fateful war."

"Yiğit Akın's treatment of the Ottoman homefront represents a critical breakthrough in the study of the First World War. Drawing upon highly original and interesting archival sources, as well as previously untapped published material, Akin vividly depicts the many hardships faced by Ottoman civilians during the course of the conflict. The book's artful prose makes it an engaging read for both students and scholars of the war, adding to its critical value for readers well beyond the field of modern Middle Eastern history."

"Yiğit Akın has written a pioneering study, examining the long-neglected Ottoman home front during World War I. When the War Came Home illuminates the war's deep social and economic impact on the empire's civilian population."

"WW I has long been a topic of interest for Ottoman scholars, but the Ottoman home front has been largely ignored or, at best, unevenly treated. In this book Akın (Tulane Univ.) shows that the length and scale of the war meant that everyone in the Ottoman empire was affected....Akın's research was extensive (he even usedoften-ignored folklore), and it enabled him to provide vivid descriptions ofthose left behind struggling to meet the state's growing material demands, succumbing to starvation and banditry, and becoming increasingly alienated from the state."

"Yiğit Akın's book, When the War Came Home: The Ottomans' Great War and the Devastation of an Empire, is a well-researched and sophisticated study of the impact of the Great War on Ottoman politics, society, and culture....Akın's study of the Ottoman civilian experience of the Great War brings to life a rich trove of sources. The book's strong research base, its sophisticated and multidisciplinary analysis, and comparative approach make it a valuable addition to the lively field of Ottoman Great War studies and to the broader scholarship on the history of the Great War."

"Akın's When the War Came Home is an important historical revision that fully portrays the imperial home front for the first time. Moreover, this unique interdisciplinary work reconsiders existing temporal, geographical, and methodological approaches to the study of World War I in the Middle East."––Melanie S. Tanielian, Journal of Interdisciplinary History

"Yiğit Akın's fascinating book is an essential read for anyone interested in the history of World War I, the late Ottoman Empire and modern Turkey and is certain to occupy an important place in these fields for many years to come."