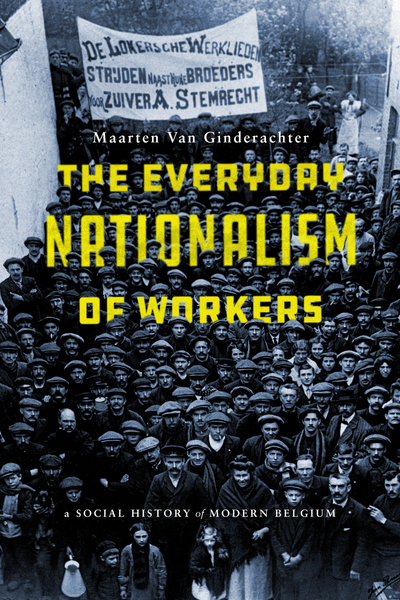 The Everyday Nationalism of Workers upends common notions about how European nationalism is lived and experienced by ordinary people—and the bottom-up impact these everyday expressions of nationalism exert on institutionalized nationalism writ large. Drawing on sources from the major urban and working-class centers of Belgium, Maarten Van Ginderachter uncovers the everyday nationalism of the rank and file of the socialist Belgian Workers Party between 1880 and World War I, a period in which Europe experienced the concurrent rise of nationalism and socialism as mass movements.

Analyzing sources from—not just about—ordinary workers, Van Ginderachter reveals the limits of nation-building from above and the potential of agency from below. With a rich and diverse base of sources (including workers' "propaganda pence" ads that reveal a Twitter-like transcript of proletarian consciousness), the book shows all the complexity of socialist workers' ambivalent engagement with nationhood, patriotism, ethnicity and language. By comparing the Belgian case with the rise of nationalism across Europe, Van Ginderachter sheds new light on how multilingual societies fared in the age of mass politics and ethnic nationalism.

Maarten Van Ginderachter is Associate Professor of History at Antwerp University. He is the co-editor of National Indifference and the History of Nationalism in Modern Europe (2019) and Nationhood from Below: Europe in the Long Nineteenth Century (2012).

"The relationships of workers and the modern labor movement to social categories such as nationality, ethnicity, class, and religion are complex and poorly understood, usually treated separately from everyday experiences. Drawing on a wide range of sources, including a unique set of 'proletarian tweets,' this superb book both illuminates the Belgian case and provides a model for future research."

"The Everyday Nationalism of Workers challenges the assumption that nationalism was imposed from above in the decades before the First World War. Based in extensive evidence, including the equivalent of 'tweets' from Belgian workers, Maarten Van Ginderachter's vivid examples build a convincing argument that will engage historians and political scientists interested in working-class patriotism."

"This well-written, innovative, and engaging study pushes us to reorient our understanding not only of language and national identity in Belgium, but also how to go about studying them. Students unfamiliar with Belgian history will have no problem jumping right into this book, for Van Ginderachter concisely introduces and contextualizes all key issues. One could even say that it serves as a kind of primer on modern Belgian history. It will be useful not only to readers interested in Belgian history, but also to those studying nationalism, language, ethnicity, and labor movements in modern European history."

"Van Ginderachter presents in vivid detail personal stories and interactions among different social classes....[This] volume is a valuable contribution to the study of nationalism."

"Van Ginderachter gives a penetrating account of the attitudes of Flemish and Walloon workers toward the fragile Belgian national project and toward their respective and increasingly politicized ethnic identities.Showing that nationalism has been instrumental in the democratic critique of power, and not only in the exercise of exclusivist and antidemocratic power, is among this book's significant accomplishments."

"All too often, nationalism studies and labour studies have followed separate paths, making it difficult to explore the way in which ordinary working-class people interpreted nationalist discourses. With this book, Maarten Van Ginderachter makes a significant contribution to counterbalance this trend while helping scholars and the general public to get acquainted with the role that national discourses played in Belgian history."

"This sociohistorical narrative provides insights of contemporary significance, as it coincides with projects of nationbuilding that seem to be rampant alongside the rise of rightwing populism across the world....The Everyday Nationalism of Workers offers useful reading not only for scholars interested in the intersections of labour, history, and colonialism or methodological innovations but also for practitioners of labour activism."

"Van Ginderachter provides us with a refreshing look at national identities among the socialist urban working class of a society with several competing narratives of nationhood."

"[The Everyday Nationalism of Workers] has made a major contribution to the study of nationalism by investigating the complexities of class, religion, and ethnic identity in Belgium before the First World War....Van Ginderachter makes a powerful argument about nationalism as both pervasive and malleable."

"Martin van Ginderachter's brilliant study entitled The Everyday Nationalism of Workers provides a detailed case study of the Belgian Workers Party (BWP) and its attempt to forge a sense of national identity that appealed to their core constituency, i.e. industrial workers, but that was still capable of differentiating the BWP's vision of nation from that of its bourgeois rivals."