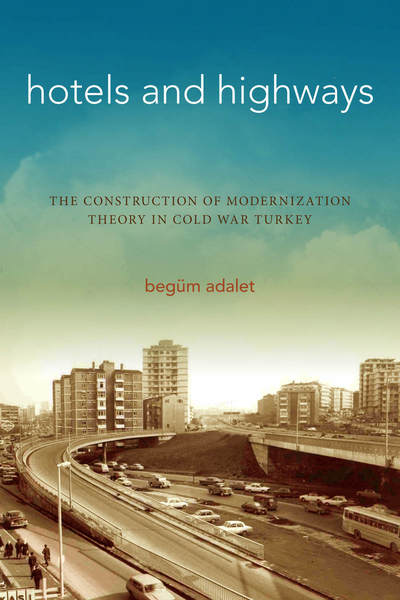 The early decades of the Cold War presented seemingly boundless opportunity for the construction of "laboratories" of American society abroad: microcosms where experts could scale down problems of geopolitics to manageable size, and where locals could be systematically directed toward American visions of capitalist modernity. Among the most critical tools in the U.S.'s ideological arsenal was modernization theory, and Turkey emerged as a vital test case for the construction and validation of developmental thought and practice.

With this book, Begüm Adalet reveals how Turkey became both the archetypal model of modernization and an active partner for its enactment. Through her analysis of the flow of aid money and expertise between the U.S. and Turkey, the planning of the American-funded Turkish highway network, and the development of the Turkish tourism industry, Adalet also highlights how "problems of knowledge" are fundamentally entwined with "problems of the political order": social scientific theories are produced in material spaces, through uncertain encounters between transnational actors and policy networks. In tracking the growth and transmission of modernization as a theory and in practice in Turkey, Hotels and Highways offers not only a specific history of a postwar development model that continues to influence our world, but a widely relevant consideration of how theoretical debates take shape in concrete situations.

"Hotels and Highways tells an absorbing story—from accounts of the modernization theorists' favorite research methods and the significant role Turkish intellectuals played in mutually shaping modernization theory itself, to the physical manifestations of their theories in infrastructures of modern capitalism in Turkey. A rich and fascinating account of how modernization theory came to Turkey."

"Hotels and Highways gives a clear understanding how U.S. hegemony was conceived and implemented in the aftermath of World War II and how thorough and decisive was its domination in Turkey and other similar places. Anybody interested in twentieth century experiences of modernity and U.S. power in the Middle East will need to read this book."

"A brilliant history of the idea of modernization in the postwar period. By studying the projects and places in which concepts were shaped, Begüm Adalet opens a new perspective on twentieth-century political thought."

"Adalet's deeply researched work regards modernization theory...as shaping the "central components" of US Cold War policy in the region. Wide-ranging chapters deal with modernization theory, sociological methods (e.g., survey research), and the role of highways and hotels in shaping modern Turkey. While the term "modernization" seems one more academic theory, Adalet sees it as a tool in the US political tool kit. On multiple levels, this is an important study of how the link of "theory" to "practice" serves key political interests. Must reading across several disciplines."

"At first sight,Hotels and Highwaysappears to be a work of architectural history, urban studies, and infrastructural geography. But it goes beyond strict disciplinary fields, presenting important insights from the perspective of political science...[W]hat makesHotels and Highwaysan outstanding work is its critical take on the topic and its focus on knowledge production through the perspective of science and technology studies."––Husik Ghulyan, H-Socialisms

"Hotels and Highways is a leap in scholarship on Turkey, with its sound exploration of American imperialism's modernization endeavors in Turkey during the Cold War. In addition to this, Adalet's book is also an exciting call for new study areas in order to understand the second half of the twentieth century in Turkey, and the Middle East."––Ilker Hepkaner, EuropeNow

"By scrupulously recognizing the agency of multiple actors and reinstating perspectives that were deliberately erased or omitted from the record, Adalet demonstrates how intersections of theory with conditions on the ground produced myriad consequences that were often unpredictable and, at times, undesirable....[She] writes with lucidity and an economy of language that conveys much subtlety in few words, making this an eminently accessible book for a broad range of audiences."

"[Hotels and Highways] is an empirically rich discussion of the negotiations and translations involved when concepts, ideas and theories travel and/or are translated into different contexts."