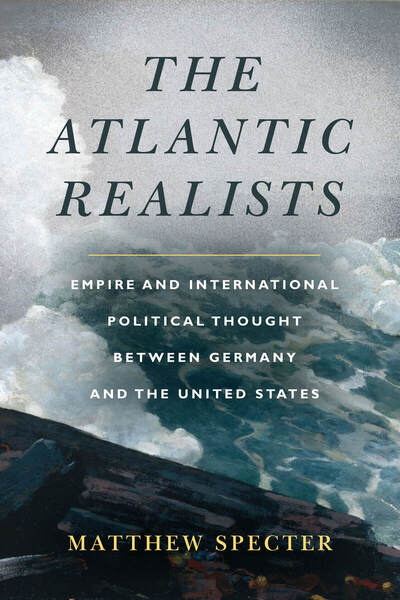 In The Atlantic Realists, intellectual historian Matthew Specter offers a boldly revisionist interpretation of "realism," a prevalent stance in post-WWII US foreign policy and public discourse and the dominant international relations theory during the Cold War. Challenging the common view of realism as a set of universally binding truths about international affairs, Specter argues that its major features emerged from a century-long dialogue between American and German intellectuals beginning in the late nineteenth century. Specter uncovers an "Atlantic realist" tradition of reflection on the prerogatives of empire and the nature of power politics conditioned by fin de siècle imperial competition, two world wars, the Holocaust, and the Cold War. Focusing on key figures in the evolution of realist thought, including Carl Schmitt, Hans Morgenthau, and Wilhelm Grewe, this book traces the development of the realist worldview over a century, dismantling myths about the national interest, Realpolitik, and the "art" of statesmanship.

Matthew Specter is a Senior Fellow at the Institute of European Studies and teaches modern European history, global history, and political thought at the University of California, Berkeley. He is also Associate Editor of the journal History and Theory. His first book was Habermas: An Intellectual Biography (2010). He researches the history of international thought.

"One may believe there is little left to know about the realist theory of international relations and its founder Hans Morgenthau. But through the complex figure of Morgenthau, Matthew Specter is able not only to work out the ambivalent pathways of the German mandarins who emigrated to the USA, but also put the theory of political realism itself into a wholly new light as a transatlantic exchange of ideas between the US and Germany. This dates back to the geopolitical thought and social Darwinistic milieu of both rising industrial powers in the 1880s. A particular gem is the surprising chapter on Wilhelm Grewe—a student of Carl Schmitt, who continued his Nazi career in the Federal Republic unbroken—and here, in postwar Germany, played a role similar to that of Morgenthau in the USA. An original, an illuminating, a brilliant book."

"A singular aspect of the German-American relationship is the cross-pollination of political and constitutional thought going back to the Revolutionary era. Matthew Specter's fascinating study shows that the concept of realism made several Atlantic crossings—beginning not, as has long been assumed, in the global cataclysm of World War II, but in the heyday of US and German empire. His trenchant critique of the 'imperial blindspots and democratic deficits' of realism is also a useful warning to the current advocates of restraint seeking to wrap themselves in the mantle of the Atlantic realist tradition."

"Matthew Specter's rich history rewrites the genealogy of realism. Specter lays bare the intellectual foundations of the default setting of American foreign policy. This is not just a major addition to trans-Atlantic intellectual history. In a world of escalating international tension, it is an urgent book."

"An intensively grounded study of a carefully defined body of thought, ambitiously pitched, and persuasively contextualized, The Atlantic Realists brings both clarity and challenge to some vital cross-disciplinary conversations, from international relations and political theory to intellectual history and political history. Among its many particular virtues is a thought-provokingly helpful commentary on the influence of Carl Schmitt."

"Specter's important cultural-historical reinterpretation of Realism relocates its intellectual origins from the Weimar Republic back to late nineteenth-century imperialism. He shows how American and German thinkers, steeped in provincial assumptions about imperialism and competition, developed the apologies for empire and the international use of force that still haunt international relations theory today."

"Matthew Specter has written a superb study that spans the intellectual history of realism across two centuries and between two continents, and traces in a most original way the network of interconnections among Atlantic Realists, notably between the US and Germany."