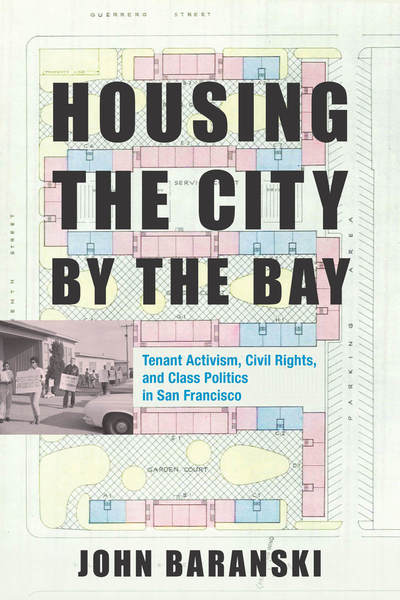 San Francisco has always had an affordable housing problem. Starting in the aftermath of the 1906 earthquake and ending with the dot-com boom, Housing the City by the Bay considers the history of one proposed answer to the city's ongoing housing crisis: public housing. John Baranski follows the ebbs and flows of San Francisco's public housing program: the Progressive Era and New Deal reforms that led to the creation of the San Francisco Housing Authority in 1938, conflicts over urban renewal and desegregation, and the federal and local efforts to privatize government housing at the turn of the twenty-first century. This history of public housing sheds light on changing attitudes towards liberalism, the welfare state, and the economic and civil rights attached to citizenship.

Baranski details the ways San Francisco residents turned to the public housing program to build class-based political movements in a multi-racial city and introduces us to the individuals—community activists, politicians, reformers, and city employees—who were continually forced to seek new strategies to achieve their aims as the winds of federal legislation shifted. Ultimately, Housing the City by the Bay advances the idea that public housing remains a vital part of the social and political landscape, intimately connected to the struggle for economic rights in urban America.

"Housing the City by the Bay takes a deeper look at the twentieth-century history of housing—first, the failures of private markets to meet the needs of working people, and then the New Deal intervention in the wake of the Depression, catalyzing a broad expansion of public housing. Combining the half century rise and fall of public housing with the unprecedented inflation of housing prices engendered by the Bay Area tech boom at the dawn of the twenty-first century, John Baranski reveals a Bay Area riven by sharp class divisions, and disarmed before the tidal wave of private interests determined to undermine any efforts to reclaim the basic human right to decent, inexpensive, high quality shelter."

"Housing the City by the Bay makes an original contribution to U.S. national political history and California social and urban history. John Baranski provides a sophisticated analysis of the complex ways that housing policy relates to the century long debate between liberals and their critics over how to define and implement citizenship rights."

"John Baranski's scholarship devastates the 'There Is No Alternative' myth when it comes to for-profit housing and the built environment. Through meticulous research and sharp historical grounding, he shows us the paths that led to the national housing crisis. Housing the City By the Bay lays bare the race and class antagonisms in a liberal city such as San Francisco. It serves as a cautionary tale and a call to action, and makes a monumental contribution to the national discussion around housing and neighborhoods."

"Anyone wishing to understand the conjoined crises of astronomical housing costs and the legions of homeless in San Francisco must read John Baranski's book, for it gives essential context usually absent from the everyday barbarism now manifest on that city's streets. Baranski reveals a century-long tug-of-war between advocates of housing as a human right and victorious champions of the marketplace. San Francisco's story is that of every American city, only more so."

"[Housing the City by the Bay] adds an important contribution to the debate over public housing....Baranski does an amazing job of documenting this history in San Francisco."

"[Housing the City by the Bay] is an excellent addition to the growing literature on the history of public housing in the United States. John Baranski is especially adept at connecting San Francisco's public housing history to national political history."