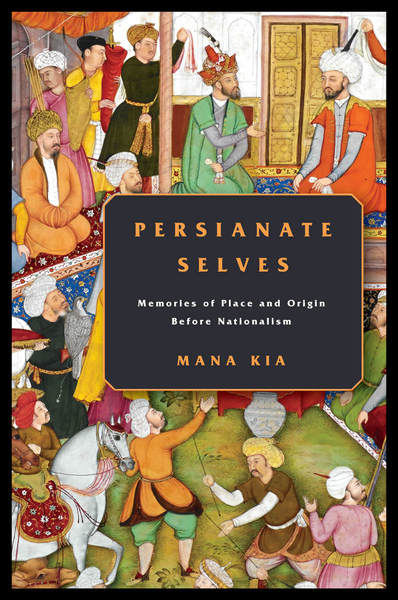 For centuries, Persian was the language of power and learning across Central, South, and West Asia, and Persians received a particular basic education through which they understood and engaged with the world. Not everyone who lived in the land of Iran was Persian, and Persians lived in many other lands as well. Thus to be Persian was to be embedded in a set of connections with people we today consider members of different groups. Persianate selfhood encompassed a broader range of possibilities than contemporary nationalist claims to place and origin allow. We cannot grasp these older connections without historicizing our conceptions of difference and affiliation.

Mana Kia sketches the contours of a larger Persianate world, historicizing place, origin, and selfhood through its tradition of proper form: adab. In this shared culture, proximities and similarities constituted a logic that distinguished between people while simultaneously accommodating plurality. Adab was the basis of cohesion for self and community over the turbulent eighteenth century, as populations dispersed and centers of power shifted, disrupting the circulations that linked Persianate regions. Challenging the bases of protonationalist community, Persianate Selves seeks to make sense of an earlier transregional Persianate culture outside the anachronistic shadow of nationalisms.

"Few questions are more vexed in the study of early modern Asia, with evidence more evanescent, than how people identified before nationalism. Drawing on dozens of Persian texts, Mana Kia scrutinizes their conceptions of place, movement, memory, lineage, origins, and onomastics to denaturalize the nationalist ties between land and language. Persianate Selves is an invaluable vade mecum for navigating the transregional Persianate past."

—Nile Green, editor of The Persianate World: The Frontiers of a Eurasian Lingua Franca

"Persianate Selves disturbs our national imaginaries and challenges the way we write Persianate history. Instead of dynastic, ethnic, and blood bound categories, we encounter kindred voices who embody Persianate adab and reveal multiple experiences of place. Whether one contests or agrees, we will all have to engage with the different terms of analysis Mana Kia offers in this pioneering work."

"Persianate Selves traverses a now-vanished cosmopolitan world and suggests a fascinating new approach to conceptualizing a shared cultural space. This engaging book is sure to generate considerable discussion among scholars interested in the intellectual cultures of the world before the nationalist divide."

"Besides its scholarly contribution, Persianate Selves is an indispensable and highly recommended book for world leaders, policymakers and anyone interested in curing their monological ways of thinking about Islamic pasts."

"In dislodging protonationalist categories in the understanding of affiliation, belonging, and selfhood, Kia offers sharp analytic tools for rethinking what it meant to be Persian before the rise of nationalism."

"Dissecting notions of home, landscape, kinship and memory, Kia provides us with a radically new framework for understanding Persianate culture. ... An excellent scholarly study worthy of close study for anyone looking to make sense of our past and present."

"Mana Kia's book is a rich and multilayered contribution to the scholarship that addresses questions of cosmopolitanism and hybridity, the possibilities of selves and collectives, the relevance of place and origin in the language ideologies, and the cultural and linguistic meanings people endow to physical spaces. ... The book itself is a beautiful ode to symbiosis, lineage and learning in the making of a cultural self."

"Kia's subtle reconstructions of eighteenth-century Persian ways of belonging should provoke anyone engaged with the textual legacies of adab to read with eyes unblinkered by nationalism."

"Persianate Selves... is novel in its use of Derridean deconstruction to distill shared forms of belonging and affiliation during the political disarray of the late eighteenth and early nineteenth centuries. Kia is part of a growing and important chorus of scholars who are questioning primordialist conceptualizations of identity by challenging widely held assumptions that Persian is a language that has always belonged to Iran or that its use in India was a foreign import, out of place and unnatural. More broadly, Kia's work holds a mirror up to historians of precolonial contexts, encouraging us to think more carefully about the fundamental conceptual and descriptive language that we use to describe how people inhabited those worlds."

Asian Review of Books
More in History—Intellectual and Cultural