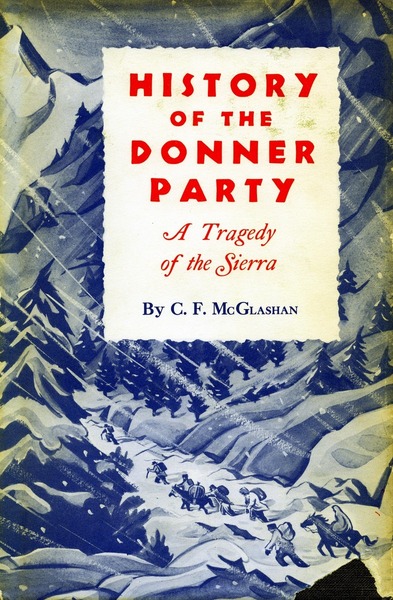 History of the Donner Party
A Tragedy of the Sierra
C. F. McGlashan Edited by George H. and Bliss McGlashan Hinkle

Originally published in 1880, McGlashan's History of the Donner Party remains in steady demand as an authoritative account of the tragic episode. The editors have added newly discovered information and photographs to their foreword, which is based on material in family documents and on the authors own recollections.

The name of the Donner Party has come to symbolize the struggle of all pioneers, for the Donner experiences were the acme of horror, despair, and suffering. This chronicle is a towering tribute to the band of pioneers who struggled over deserts and the High Sierra toward California during the rugged winter of 1846-47. The disasters they endured form a bold contrast to the comfort and safety of the present-day Donner Lake region.

Mr. McGlashan was a contemporary of the Donner Party's children. From the many survivors of the expedition whom he knew and interviewed, from a personal knowledge of the route followed, from more than a thousand letters written to him by survivors, and from consultations with still-living authors of older works on the subject. McGlashan was able to verify the facts and write a book from the point of view of the survivors themselves.

"Historians owe much to the patient industry of McGlashan, who brought together the facts of the tragic Donner episode. . . . McGlashan's work will remain the standard, as well as the pioneer, presentation of facts. The editors have made a notable contribution in their lengthy introduction as well as in the maps, editors' notes, and bilbiography."

"The author's account is still the best available on that famous expedition."

"One of the most important sources of information concerning perhaps the best known, because it is the most sensational and horrifying, episode in western American history. . . . The History of the Donner Party is a splendid piece of work."

"McGashan expended tremendous energy in amassing historical evidence about the tragic fate of the party. . . . The firsthand information endowed his writing with immediacy and vitality. As a description of what happened, the book stands alone."

"Though first published over 60 years ago, McGlashan's notable book on the Donner party has been in constant demand, and this facsimile republication, with definite bibliography, additional maps, photographs and notes, together with an extensive foreword on McGlashan by George H. and Bliss McGlashan Hinkle constitutes the finest edition yet offered. . . . [McGlashan's] book is still a source on one of the west's greatest epics, and is here presented in a thoroughly satisfying edition."

"This is a great item of Americana."

"[History of the Donner Party] is now reprinted with excellent editorial notes and foreword by George H. and Bliss McGlashan Hinkle. Increasing its value for collectors of western Americana, the text is a photographic reproduction of the standard 1880 edition."

"It remains supreme in its field."

"An item of Americana in general and of California's history in particular, this is an account of a tragic episode in the vast westward migration of the 19th century. . . . A reasonable and authentic version. The lengthy introduction, the editors' notes, the maps and bibliography, contribute a great deal to the factual matter in the body of the works. . . . It is gripping and heart-rending and can be read by those interested in adventure as well as by the students of history."