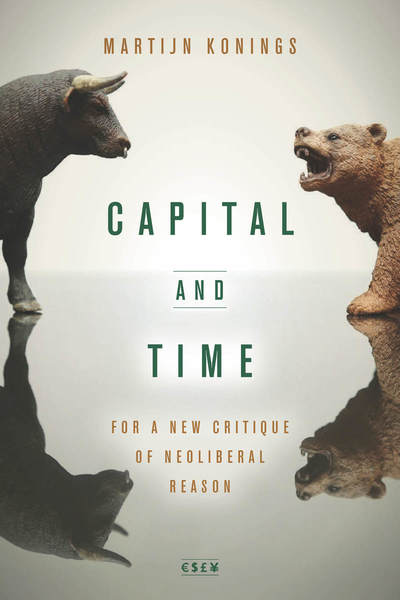 Critics of capitalist finance tend to focus on its speculative character. Our financial markets, they lament, encourage irresponsible bets on the future that reflect no real underlying value. Why is it, then, that opportunities for speculative investment continue to proliferate in the wake of major economic crises? To make sense of this, Capital and Time advances an understanding of economy as a process whereby patterns of order emerge out of the interaction of speculative investments.

Progressive critics have assumed that the state occupies a neutral, external position from which it can step in to constrain speculative behaviors. On the contrary, Martijn Konings argues, the state has always been deeply implicated in the speculative dynamics of economic life. Through these insights, he offers a new interpretation of both the economic problems that emerged during the 1970s and the way that neoliberalism responded to them. Neoliberalism's strength derives from its intuition that there is no position that transcends the secular logic of risk, and from its insistence that individuals actively engage that logic. Not only is the critique of speculation misleading as a general approach; it is also incapable of recognizing how American capitalism has come to embrace speculation and has thus been able to generate new kinds of order and governance.

Martijn Konings is Associate Professor of Political Economy at the University of Sydney. His most recent book is The Emotional Logic of Capitalism (Stanford, 2015).

"Critiquing the critique of neoliberalism, Konings argues forcefully that Minsky, not Habermas, provides the needed foundations for a possible social theory of the present world, a "non-essentialist economism" that engages the neoliberal project at its very core."

"This remarkable book offers a new perspective on speculation, neo-liberalism, and contemporary finance. Erudite, beautifully written, and original in its arguments about money, value, and risk, it will be of great interests to economists, sociologists, and philosophers concerned with markets and uncertainty."

"A smart, erudite contribution to the emerging critical literature on speculative value and the complex imbrication of financialization with neoliberalism."

"A must-read for anyone interested in the operation of neoliberal reason following the recent financial crisis, Martijn Konings's timely book develops new ways of thinking about money, finance, and the speculative basis of contemporary capitalism."

"In this profound and sharp-witted study, Martijn Konings leads us through the dead ends of the modern and postmodern critique of capitalism towards a new critical theory that looks our financial economy in the eye."

"Martijn Konings has given us an elegant, erudite book that points to the centrality of speculation—and a speculative logic of time—in modern political economy."

"Ten years after the apex of the financial crisis, Konings...opens a much-needed debate in critical political economy, the social studies of finance, and related fields of scholarship, exposing a variety of weaknesses in what now appear as ad-hoc accounts developed in the wake of the crash."

"Konings' consideration of the state of the field [is] both enlightening and convincing.....His argument is specific, energetic and organized, and, as in his trenchant The Emotional Logic of Capitalism (2015), he demonstrates a wonderful ability to deconstruct the tautologies and false dichotomies on which so much of what passes for criticism are based."

"Written in the form of a short through perceptive intellectual commentary on a series of contemporary and classical works, Capital and Time indeed begins with a warning about the impasses of a fundamentalist theory of value opens for the critique of finance."

"Written in the form of a short through perceptive intellectual commentary on a series of contemporary and classical works, Capital and Time indeed begins with a warning about the impasses a fundamentalist theory of value opens for the critique of finance."

"Finally, a book that refuses to confine finance to the domain of fictitious capital....Konings advances the critique of neoliberalism in ways accounting for its reinvigoration in the wake of the 2007/8 economic crisis."––Brett Nielson, Journal of Australian Political Economy

"In this new and fascinating book, Martijin Konings pulls together an impressive range of sociological and philosophical traditions into an original theory of capital (but, more broadly, money) and time under neoliberalism."––Simone Polillo, Contemporary Sociology

The Time of Finance

Los Angeles Review of Books
Capital and Time: For a New Critique of Neoliberal Reason