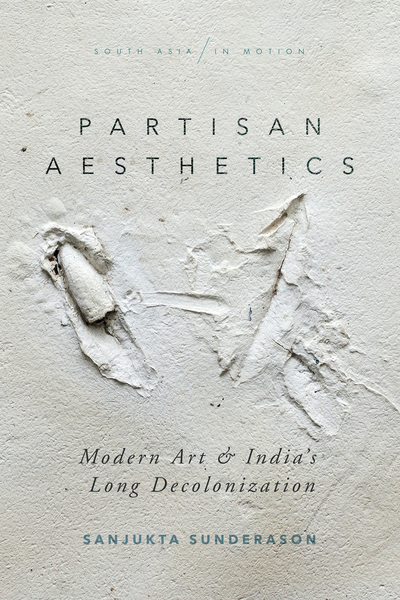 Winner of the Best Art Publication Accolade at the 2021 ICAS Book Prize, sponsored by the International Convention of Asia Scholars.

Partisan Aesthetics explores art's entanglements with histories of war, famine, mass politics and displacements that marked late-colonial and postcolonial India. Introducing "partisan aesthetics" as a conceptual grid, the book identifies ways in which art became political through interactions with left-wing activism during the 1940s, and the afterlives of such interactions in post-independence India. Using an archive of artists and artist collectives working in Calcutta from these decades, Sanjukta Sunderason argues that artists became political not only as reporters, organizers and cadre of India's Communist Party, or socialist fellow travelers, but through shifting modes of political participations and dissociations. Unmooring questions of Indian modernism from its hitherto dominant harnesses to national or global affiliations, Sunderason activates, instead, distinctly locational histories that refract transnational currents. She analyzes largely unknown and dispersed archives—drawings, diaries, posters, periodicals, and pamphlets, alongside paintings and prints—and insists that art as archive is foundational to understanding modern art's socialist affiliations during India's long decolonization. By bringing together expanding fields of South Asian art, global modernisms, and Third World cultures, Partisan Aesthetics generates a new narrative that combines political history of Indian modernism, social history of postcolonial cultural criticism, and intellectual history of decolonization.

Sanjukta Sunderason is Assistant Professor at the Leiden University Institute for Area Studies, the Netherlands.

"Sunderason's timely tracing of the production of the political in and through visual art contributes to our global understanding of the aesthetic forms of decolonization. The result is a rigorous argument regarding the many modalities of the mutual entanglement of art and progressive politics during a transformative period of modern India's history."

"An original and timely book, Partisan Aesthetics is essential reading for scholars of modern South Asia and its visual culture, global urbanisms, and art in socialist and postsocialist societies."

"Archivally grounded and methodologically sophisticated, this work is a defining study of modern art in South Asia. A most significant contribution to our understanding of the relation between aesthetics and politics in a global context."