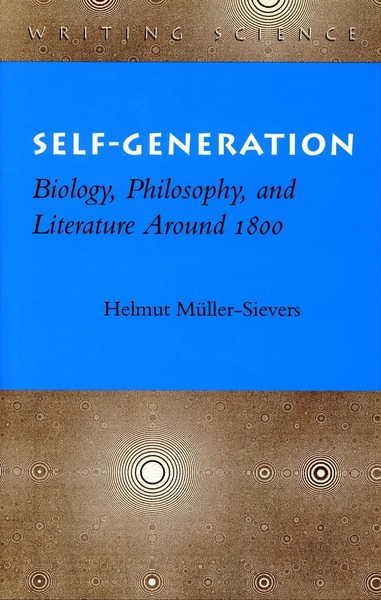 The genealogy and function of epigenesis—the theory that organisms generate themselves under the guidance of a formative drive—provides a unique means of understanding the profound changes in philosophy, philosophy of language, and literature at the turn of the nineteenth century.

The book begins by describing how and why epigenesis came to replace the reigning model of biological origination, preformation—the theory that all organisms were preformed at the creation of the world. Contemporary with these developments, Kant used the figures of epigenesis and self-formation to illustrate his concepts of the origin of the categories, the possible success of practical reason, and the validity of aesthetic and teleological judgments. The author shows how Kant's figurative use of self-generation was turned into an indispensable determination by Fichte and his successors: philosophical knowledge can claim absolute certainty only if it can prove that it generates itself in logically accountable procedures.

This self-generating philosophy—also known as Idealism—was in turn accompanied by a revaluation of the origin of language, notably by Herder and by Humboldt, who attempted to formulate self-generation as the philosophical foundation for a future Science of Language. The book concludes by demonstrating that the biological, philosophical, and linguistic problematic of self-generation is at the heart of Goethe's novel Elective Affinities and Beaumarchais's The Marriage of Figaro.

Helmut Müller-Sievers is Associate Professor of German and Comparative Literary Studies at Northwestern University. He is the author of Epigenesis: Naturphilosophie im Sprachdenken Wilhelm von Humboldts.

“This very important book provides a rare insight into the background conditions of philosophical and literary production in the eighteenth and nineteenth centuries by examining the debate in biology between preformation theory and epigenesis. The chief significance of Müller-Sievers' study lies in demonstrating that the victory of epigenesis shaped theory formation in philosophy (Kant, Fichte), language acquisition (Herder, Humboldt), and literature (Goethe, Beaumarchais).”—Eckart Förster, University of Munich