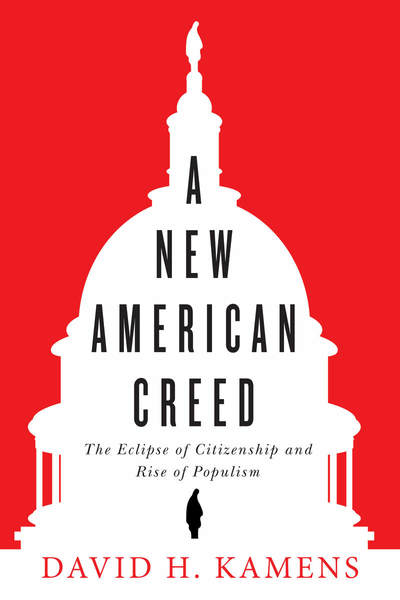 A new American creed has reconstructed the social contract. Generations from 1890 to 1940 took for granted that citizenship entailed voting, volunteering, religiosity, and civic consciousness. Conspicuously, the WWII generation introduced collectivist notions of civic obligations—but such obligations have since become regarded as options. In this book, David H. Kamens takes this basic shift as his starting point for exploring numerous trends in American political culture from the 1930s to the present day. Drawing on and synthesizing an enormous array of primary and secondary materials, Kamens examines the critical role of macro social changes, such as the growth and expansion of government and education, often in response to the emergence of globalization. From these tectonic shifts erupted numerous ripple effects, such as the decline of traditional citizen values, the rise of individualism, loss of trust in institutions, anti-elitism, and dramatic political polarization. In this context, antagonism to government as an enemy of personal freedom grew, creating a space for populist movements to blossom, unrestrained by traditional political parties. Beyond painting a comprehensive picture of our current political landscape, Kamens offers an invaluable archive documenting the steps that got us here.

"In the tradition of Tocqueville, Almond and Verba, and Lipset, David Kamens provides a sweeping analysis of the U.S. polity, paying special attention to its distinctive development from the 1930s and the distinctive predicament it is in today. The book is masterfully crafted and urgently needed at this moment of harrowing political crisis."

"Kamens provides an impressive depiction of historic American political culture – individualist and anti-statist – as explaining current public crises and conflicts. From this point of view, the contemporary scene is less exceptional than the period of mobilized consensus from the 1930s through the '80s. This creative book will be of great interest to those thinking about the future of American democracy, especially as globalization disconnects empowered individuals from the responsibilities and constraints of citizenship."

"A New American Creed: The Eclipse of Citizenship and Rise of Populism provides a sophisticated analysis of a fundamental issue of our times – the nature of contemporary American democracy. Kamens makes an unparalleled case for understanding prominent features of recent decades, such as the rise of populism and nativism, as emerging in part due to long-term cultural and institutional changes at national and global levels. He reminds us that the reconstruction of the individual actor as the primary focus of social, political, and economic action facilitates, on the one hand, the expansion of civil rights to historically marginalized groups, but, on the other hand, simultaneously undercuts the emergence of a strong welfare state and allows for massive inequality. This theoretically innovative and well-argued book is a must-read for anyone interested in the present and future of American democracy."

"A New American Creed is so rich in data and original insights—of which this review can barely scratch the surface—that it should be required reading for every officeholder, candidate, and voter interested in understanding the current political climate, how we got here, and whether the situation is reparable."

"[Kamens'] conclusions are sobering, to say the least. He worries about the rise of individualism and whether it can coexist with a stable and viable political community....Can [US political parties] manage polarization and provide stability to the political system? Kamens offers little hope that they can. Recommended."