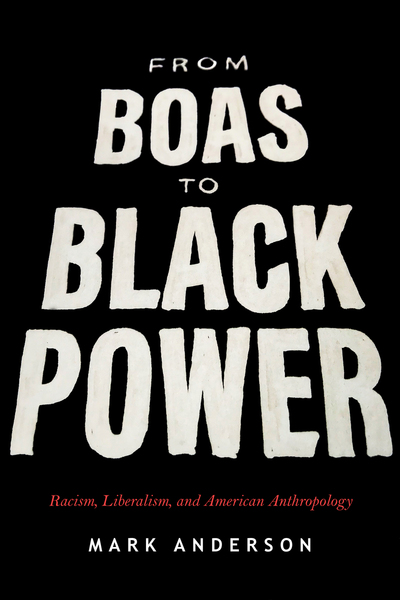 Winner of the 2020 Vinson Sutlive Book Prize in Historical Anthropology, sponsored by the Department of Anthropology at William & Mary.

From Boas to Black Power investigates how U.S. cultural anthropologists wrote about race, racism, and "America" in the 20th century as a window into the greater project of U.S. anti-racist liberalism. Anthropology as a discipline and the American project share a common origin: their very foundations are built upon white supremacy, and both are still reckoning with their racist legacies. In this groundbreaking intellectual history of anti-racism within twentieth-century cultural anthropology, Mark Anderson starts with the legacy of Franz Boas and Ruth Benedict and continues through the post-war and Black Power movement to the birth of the Black Studies discipline, exploring the problem "America" represents for liberal anti-racism.

Anderson shows how cultural anthropology contributed to liberal American discourses on race that simultaneously bolstered and denied white domination. From Boas to Black Power provides a major rethinking of anthropological anti-racism as a project that, in step with the American racial liberalism it helped create, paradoxically maintained white American hegemony. Anthropologists influenced by radical political movements of the 1960s offered the first sustained challenge to that project, calling attention to the racial contradictions of American liberalism reflected in anthropology. Their critiques remain relevant for the discipline and the nation.

Mark Anderson is Associate Professor of Anthropology at University of California, Santa Cruz. He is the author of Black and Indigenous: Garifuna Activism and Consumer Culture in Honduras (2009).

"From Boas to Black Power thoughtfully examines the contradictions and tensions of anthropology's last 100 years. Using Boasian interventions on race and culture as a valuable starting point, this important book explains how thinking about race/racism in anthropology (and in the wider public culture) pivots on various assumptions about liberalism that link race to American identity in ways that haunt the country as much as ever these days."

"This is an important intervention in the history of U.S. anthropology, particularly the history of anthropological debates on race, racism, and the intellectual impact of Black Power as a social movement. Mark Anderson's interrogation of the liberal anti-racism associated largely with Boasians seriously engages the critiques and alternative scholarship of William Willis, Diane Lewis, Charles & Betty Lou Valentine, and St. Clair Drake, who belonged to an earlier decolonizing generation that cleared the ground for later critical anti-racist projects. This insightful analysis un-silences significant aspects of anthropology's past and illuminates how dominant liberal modalities of anti-racism—regardless of intention—sustain the epistemic, cultural, and structural power of white supremacy, an obstacle to justice, well-being, and liberation."