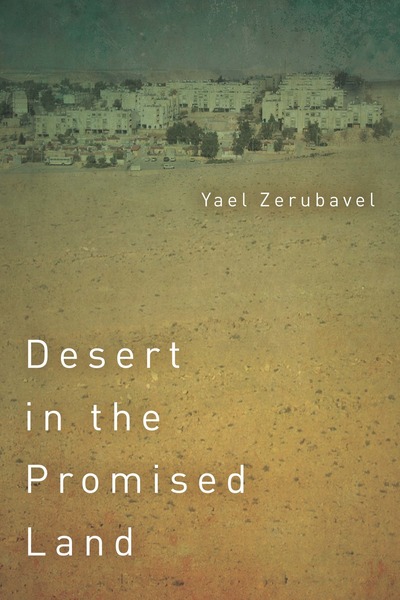 At once an ecological phenomenon and a cultural construction, the desert has varied associations within Zionist and Israeli culture. In the Judaic textual tradition, it evokes exile and punishment, yet is also a site for origin myths, the divine presence, and sanctity. Secular Zionism developed its own spin on the duality of the desert as the romantic site of Jews' biblical roots that inspired the Hebrew culture, and as the barren land outside the Jewish settlements in Palestine, featuring them as an oasis of order and technological progress within a symbolic desert.

Yael Zerubavel tells the story of the desert from the early twentieth century to the present, shedding light on romantic-mythical associations, settlement and security concerns, environmental sympathies, and the commodifying tourist gaze. Drawing on literary narratives, educational texts, newspaper articles, tourist materials, films, popular songs, posters, photographs, and cartoons, Zerubavel reveals the complexities and contradictions that mark Israeli society's semiotics of space in relation to the Middle East, and the central role of the "besieged island" trope in Israeli culture and politics.

Yael Zerubavel is Professor of Jewish Studies & History and the founding director of the Allen and Joan Bildner Center for the Study of Jewish Life at Rutgers, The State University of New Jersey. She is the author of Recovered Roots: Collective Memory and the Making of Israeli National Tradition (1995).

"Written with passion, innovation, and clarity, Desert in the Promised Land makes an original and significant contribution towards understanding the deeper currents of the Israeli-Palestinian conflict. By analyzing the role of the desert in Zionist ideology and the collective identity of Israel, Zerubavel adds new dimensions to her groundbreaking and acclaimed study of Israeli myths and memory, Recovered Roots."

"In Desert in the Promised Land, space and memory, desert and settlement, are interwoven into a complex and fascinating portrait of Israel. Yael Zerubavel has written an engaging book that combines anthropology, culture, and history."

"Yael Zerubavel has produced an important, original study of the multiple meanings of the desert in Zionist and Israeli culture. Ranging from the early twentieth century to the present, Zerubavel brings together a vast array of sources, which she reads with deep insight and describes in graceful prose."

—Derek J. Penslar, author of Jews and the Military: A History

"In a rewarding but not easy read, Zerubavel analyzes the complex meanings and varied perceptions of this desert for Jews before 1948 and for Israelis thereafter. She organizes her analysis as a metaphysical yet also a chronological journey through the symbolic desert landscape of space and meaning. The text moves from the ancient biblical story of divine revelations and of national birth of the Jewish people to the more recent tension between the themes of desert and settlement as opposing symbolic landscapes. Recommended."

"Desert in the Promised Land is not an academic exercise in abstract distinctions, but a 'metaphorical journey' through the collective Jewish Israeli imaginary drawing from literary narratives, educational texts, newspaper articles, tourist materials, films, popular songs, posters, photographs, and cartoons. Recommended to all academic libraries."