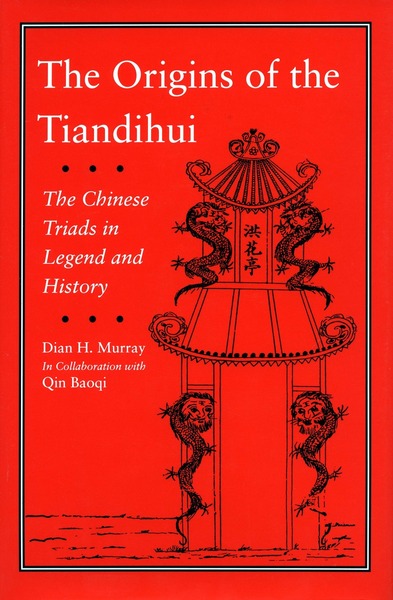 The Origins of the Tiandihui
The Chinese Triads in Legend and History
Dian H. Murray In Collaboration with Qin Baoqi

The Tiandihui, also known as the Heaven and Earth Association or the Triads, was one of the earliest, largest, and most enduring of the Chinese secret societies that have played crucial roles at decisive junctures in modern Chinese history. These organizations were characterized by ceremonial rituals, often in the form of blood oaths, that brought people together for a common goal.

Some were organized for clandestine, criminal, or even seditious purposes by people alienated from or at the margins of society. Others were organized for mutual protection or the administration of local activities by law-abiding members of a given community.

The common perception in the twentieth century, both in China and in the West, was that the Tiandihui was founded by Chinese patriots in the seventeenth century for the purpose of overthrowing the Qing (Manchu) dynasty and restoring the Ming (Chinese). This view was put forward by Sun Yat-sen and other revolutionaries who claimed that, like the anti-Manchu founders of the Tiandihui, their goal was to strip the Manchus of their throne.

The Chinese Nationalists (Guomindang) today claim the Tiandihui as part of their heritage.

This book relates a very different history of the origins of the Tiandihui. Using Qing dynasty archives that were made available in both Beijing and Taipei during the last decades, the author shows that the Tiandihui was founded not as a political movement but as a mutual aid brotherhood in 1761, a century after the date given by traditional historiography.

She contends that histories depicting Ming loyalism as the raison d'etre of the Tiandihui are based on internally generated sources and, in part, on the "Xi Lu Legend," a creation myth that tells of monks from the Shaolin Monastery aiding the emperor in fighting the Xi Lu barbarians.

Because of its importance to the theories of Ming loyalist scholars and its impact on Tiandihui historiography as a whole, the author thoroughly investigates the legend, revealing it to be the product of later - not founding - generations of Tiandihui members and a tale with an evolution of its own. The seven extant versions of the legend itself appear in English translation as an appendix.

This book thus accomplishes three things: it reviews and analyzes the extensive Tiandihui literature; it makes available to Western scholars information from archival materials heretofore seen only by a few Chinese specialists; and it firmly establishes an authoritative chronology of the Tiandihui's early history.

"An important book. . . . Murray has astutely sifted through a huge body of primary and secondary sources in both Chinese and English to present an excellent historiographical study of the origins of the Heaven and Earth Society. . . . This is a book well worth reading."