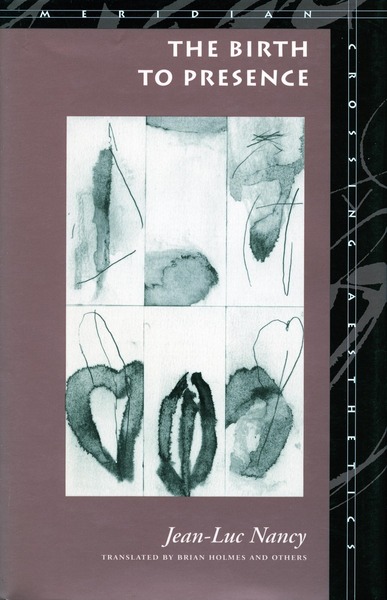 The Birth to Presence
Jean-Luc Nancy Translated by Brian Holmes and others
SERIES: Meridian: Crossing Aesthetics

The central problem posed in these essays, collected from over a decade of work, is how in the wake of Western ontologies to conceive the coming, the birth that characterizes being. We are now at the limit of representation, where objects as we experience them have been show to be merely objects of representation—or rather, of presentation, since there is nothing to (re)present. The first part of this book, "Existence," asks how, today, one can give sense of meaning to existence as such, arguing that existence itself, as it comes nude into the world, must now be our "sense."

In examining what this birth to presence might be, we should not ask what presence "is"; rather we should conceive presence as presence to someone, including to presence itself. This birth is not the constitution of an identity, but the endless departure of an identity from, and from within, its other, or others. Its coming is not desire but jouissance, the joy of averring oneself to be continually in the state of being born—a rejoicing of birth, a birth of rejoicing.

The second section, "Poetry," asks: What art exposes this? In writing, in the voice, in painting? And what if art is exposed to it? How does it inscribe (or rather, "exscribe," in a term the book develops) the coming existence as such? The author's trajectory in this book crosses those of Hegel, Schlegel, Baudelaire, Nietzsche, Freud, and Heidegger, in their comments on art and politics, existence and corporeality, everyday life and its modes of existence and ecstasy. An analysis that dares this crossing involves all the varied accounts of existence, political as well as philosophical, and all the realms of poverty.