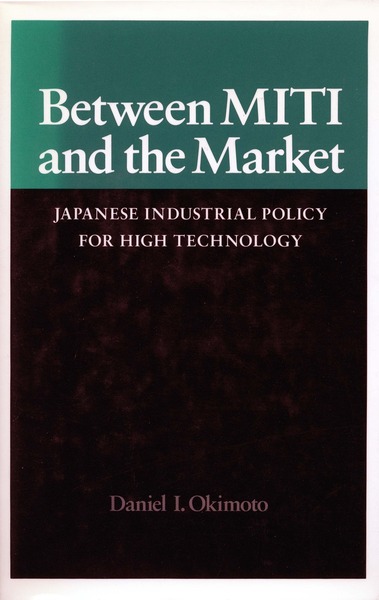 Between MITI and the Market
Japanese Industrial Policy for High Technology
Daniel I. Okimoto
SERIES: Studies in International Policy

Over the postwar period, the scope of industrial policy has expanded markedly. Governments in virtually all advanced industrial countries have extended the visible hand of the state in assisting specific industries or individual companies. Although greater government involvement in some countries has lessened the dislocations brought about by slower growth rates, industrial policy has also caused or exacerbated a number of other problems, including distortions in the allocation of capital and labor and trade conflicts that undermine the postwar system of free trade.

Only Japan is widely cited as an unambiguous success story. The effectiveness of its industrial policy is revealed in the successful emergence of one government-targeted industry after another as world-class competitors: for example, steel, automobiles, and semiconductors. Foreign countries fear that a number of still-developing industries—like biotechnology, telecommunications, and information processing—will follow the same pattern. But is industrial policy the main reason for Japan's economic achievements? The author asserts that the reasons for Japan's spectacular track record go well beyond the realm of industrial policy into broad areas of the political economy as a whole.

In this book, the author attempts to identify the reasons for the comparative effectiveness of Japanese industrial policy for high technology by answering the following questions: What is the attitude of Japanese leaders toward state intervention in the marketplace? What is the Ministry of International Trade and Industry (MITI) doing to promote the development of high technology? How has the organization of the private sector contributed to MITI's capacity to intervene effectively? What elements in Japan's political system help insulate industrial policymaking from the demands of interest-group politics?