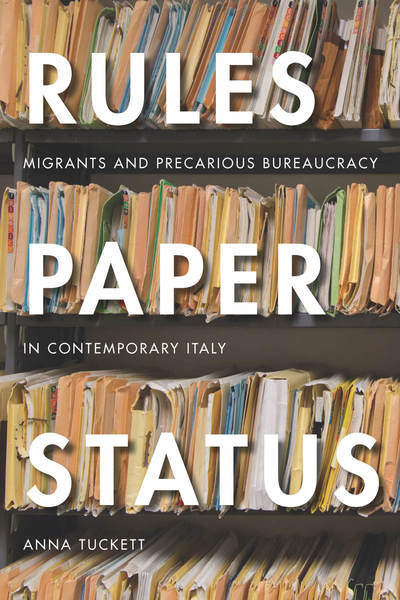 Winner of the 2019 William A. Douglass Prize in Europeanist Anthropology, sponsored by the Society for the Anthropology of Europe (a unit of the American Anthropological Association).

Whether motivated by humanitarianism or concern over "porous" borders, dominant commentary on migration in Europe has consistently focused on clandestine border crossings. Much less, however, is known about the everyday workings of immigration law inside borders. Drawing on in-depth ethnographic fieldwork in Italy, one of Europe's biggest receiving countries, Rules, Paper, Status moves away from polarized depictions to reveal how migration processes actually play out on the ground. Anna Tuckett highlights the complex processes of inclusion and exclusion produced through encounters with immigration law.

The statuses of "legal" or "illegal," which media and political accounts use as synonyms for "good" and "bad," "worthy" and "unworthy," are not created by practices of border-crossing, but rather through legal and bureaucratic processes within borders devised by governing states. Taking migrants' interactions with immigration regimes as its starting point, this book sheds light on the productive nature of legal and bureaucratic encounters and the unintended consequences they produce. Rules, Paper, Status argues that successfully navigating Italian immigration bureaucracy, which is situated in an immigration regime that is both exclusionary and flexible, requires and induces culturally specific modes of behavior. Exclusionary laws, however, can transform this social and cultural learning into the very thing that endangers migrants' right to live in the country.

Anna Tuckett is Research Fellow in the Department of Anthropology at the London School of Economics and Political Science.

"This compelling book transports the reader into the maze of immigration law enforcement in Italy. A must-read for immigration scholars and anyone interested in the day-to-day workings of street-level bureaucrats and the myriad ways they make law and in the process, transform immigrants into 'cultural citizens.'"

"Anna Tuckett's lively and engaging book sheds new light on the confused relationship between migrants and Italian state bureaucracy, and the gaps between formal law and 'practical stuff.' Rules, Paper, Status makes a vital contribution to our understanding of the bureaucratic and legal anomalies produced by the current 'moral panic' in Europe concerning immigration."

"[Tuckett's] findings show that, paradoxically, even while migrants develop cultural skills in navigating bureaucratic norms, these abilities do not challenge the larger exclusionary views and practices of the Italian state and society....Tuckett's clear, concise writing makes this book an excellent gateway to a critical topic treated with analytical rigor....Highly recommended."

"By focusing on the sinewy and unstable ties between migrants and their legal status, [Tuckett] offers a rich analysis of legal and bureaucratic practices that shape migrants' economic and political opportunities as well as their social and cultural life in Italy.[Rules, Paper Status] provides a crucial contribution to theorizing about citizenship in European countries and the hegemonic discourse of integration."––Veronica Ferrari, Allegra

"Rules, Paper, Status is a timely and relevant contribution to understanding the workings of the state beyond discourses of border enforcement....[it] speaks to a broader readership, including academics and state officials, and contributes to contemporary discussions on studying the 'state' at street level."

"Rules, Papers, Status is a vivid journey into the workaday functioning of the Italian 'documentation regime'[It] poignantly depicts a country that seems unable to come to terms with its migrants."