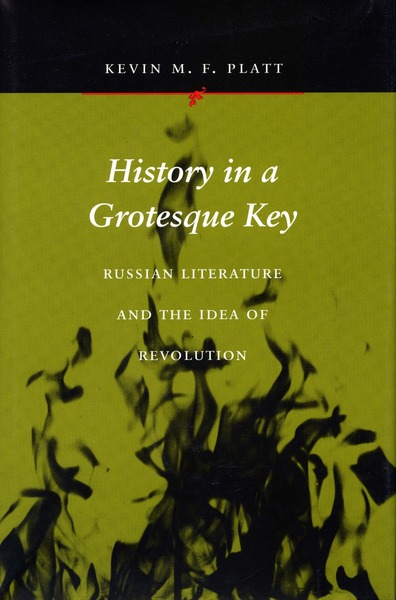 History in a Grotesque Key
Russian Literature and the Idea of Revolution
Kevin M. F. Platt

What special possibilities for literary creation arise in periods of rapid transition from one set of social institutions to another? This book examines four such periods in Russian history: the era of Peter the Great and his successors, the epoch of the Great Reforms of the 1860's, the decades following the Russian Revolution, and the period of social and political upheaval in the late 1980's and the 1990's. Since the eighteenth century, the idea of revolutionary social change has been a central element in the Russian understanding of history—in what may be called the historical mythology of Russia.

The literary works studied in this book, some well known but most obscure, all engage the mythology of revolutionary social change as it was deployed in their times. Yet instead of describing their epochs as moments of triumphant transition from the outworn past to the glorious future, these works describe their social worlds as bizarre, comical, and confused hybrids of the past and future. The author sees these works as a variation of the grotesque, as a "revolutionary grotesque" that is intimately connected to the historical mythology of radical social transformation in Russia.

Examining these works in their social-cultural-historical context, the author investigates what they reveal about the social transformations of their times and about the idea of revolution in Russia in general. He argues that the historical, or revolutionary, grotesque represents an approach to history that brings to center stage the tremendous ironies of historical periods that have been proclaimed as moments of human triumph, emancipation, and transcendence, yet have resulted in bloodshed and slavery on a vast scale.

“An elegant investigation into the interconnections between history and literacy . . . subtle and nuanced, and he is unfailingly intelligent in his use of literary and cultural theory. . . . Yet Platt’s analyses are far richer than this overarching scheme . . . whose contribution to the study of history and literature in Russia is significant.”—Thomas Seifrid, University of Southern California